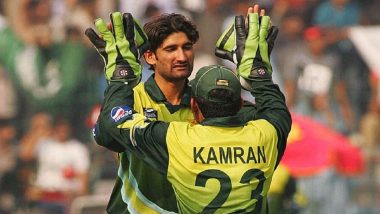 Lahore, June 19: Left-arm Pakistan fast bowler Sohail Tanvir has recalled his Test debut during which he got the priced scalp of Rahul Dravid with a delivery which, according to him, was the ball of his life. Tanvir made his Test debut against India at the Feroz Shah Kotla (now known as Arun Jaitley Cricket Stadium) in 2007. He got Dravid out on 38 through a peach of a delivery during India's first innings in reply to Pakistan 231.

"Initially I wasn't a part of the squad. I was part of the ODIs. Umar Gul got injured accidentally. The way I got Dravid out on my debut, I still remember it was ‘ball of my life'," Tanvir said on the YouTube show called ‘Cric Cast'. Best Bowling Figures in IPL: Alzarri Joseph Breaks Sohail Tanvir’s Record, Scalps 6/12 During Sunrisers Hyderabad vs Mumbai Indians VIVO IPL 2019 Match.

"I remember Wasim Akram had once dismissed Dravid - with the same length, the same line, the same delivery. The ball swung from left stump and clipped off the off-stump. It was my dream delivery," he added. Tanvir said it was a great experience as he got an opportunity to the likes of batting stalwarts like Sachin Tendulkar, Dravid, VVS Laxman, and Sourav Ganguly.

"Bowling against the greats like Dravid, Sachin, Laxman, and Ganguly especially in India was remarkable. These are the guys that have made thousands of runs in Test cricket. They have so many achievements," said the 35-year-old.

"Especially if you talk about Rahul Dravid, he was called the wall. Breaking through his defence was very hard, being a youngster, and especially it being a surprise call since I wasn't prepared for the Test side at the time," he added. Apart from Dravid, the left-arm pacer got the wickets of Ganguly (8) and Harbhajan Singh (1) in that innings where the host got bundled out for 274.

"My self-belief and confidence has helped me throughout my career. I bowled well in the first Test. I took three back-to-back wickets. I got Ganguly, Dravid and Harbhajan Singh out. I got our side back into that Test." In second innings, Pakistan scored 247 and set up a target of 203 which India chased down with six wickets in hand.

The left-arm pacer, who played only one more Test after that match, however believes it was unfortunate that he couldn't play more Test cricket after that. "Unfortunately my Test career ended there. That was very unfortunate. Even when I think about it today, I think I could have played a lot more Tests for Pakistan," said Tanvir.

"People call me a T20 specialist and white-ball cricketer but nobody knows about my strengths. They don't know what I am capable of with the red-ball. If you look at my stats or ask people I have played against, you can get an idea. Unfortunately, I couldn't get many chances," added the bowler who has represented Pakistan in 62 ODIs and 57 T20Is picking up 71 and 54 wickets respectively.

(The above story first appeared on LatestLY on Jun 19, 2020 04:33 PM IST. For more news and updates on politics, world, sports, entertainment and lifestyle, log on to our website latestly.com).