Stuart Broad Unlikely to Make it to England Playing XI for 1st Test Against West Indies Due to Tactical Reasons: Reports 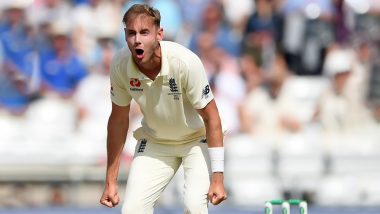 Veteran England pacer Stuart Broad hasn’t missed a home Test since the last eight years. However, the streak is likely to be get broken in the 1st England vs West Indies Test in Southampton due to the side’s tactical plans. The home team is reportedly tempting to play speedsters Jofra Archer and Mark Wood in the same line-up in the opening game which means Broad might have to warm the benches in the encounter. Joe Root's Absence Hands 'A Bit of an Advantage' to Us, Says Kemar Roach.

According to a report in The Guardian, “Broad faces the prospect of missing a first home Test match in eight years as England give serious consideration to unleashing the dual pace of Jofra Archer and Mark Wood at the earliest opportunity.”

James Anderson is set to lead the English bowling attack in the encounter and with Dominic Bess likely to be the lone spinner, Broad might have to make the way out. Also, the stand-in skipper Ben Stokes is himself a handy pace bowler. Archer and Wood possess the ability to set the speed gun on fire. However, the two fast bowlers have been injury-prone and hence, hasn’t been able to join forces in the longest format of the game. England vs West Indies 2020: 5 Records & Stats You Need to Know Ahead of the ENG vs WI Test Series.

However, the duo is fit and fine at the moment and is form partnership at the Ageas Bowl. Even, Chris Woakes, who has been one of England’s consistent pacers, is not likely to feature in the XI.

Broad last missed a home Test against West Indies back in 2012. Also, his tally of 485 Test wickets is the second-most for any England bowler in the longest format of the game. He was expected to achieve the landmark of 500 Test wickets in the series against Caribbeans. However, it seems like the 33-year-old might have to wait a bit longer. Meanwhile, the first Test of the three-match series, which will also mark the return of international cricket after COVID-19 break, will get underway on July 8.

(The above story first appeared on LatestLY on Jul 06, 2020 11:33 AM IST. For more news and updates on politics, world, sports, entertainment and lifestyle, log on to our website latestly.com).