England vs West Indies 2020: 5 Records & Stats You Need to Know Ahead of the ENG vs WI Test Series 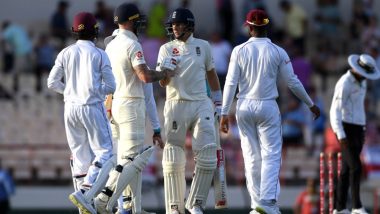 International cricket is all set to resume today (July 08) amid the coronavirus pandemic. In March, we witnessed the last international cricket game played between Australia and New Zealand before sports activities were suspended. England and Wales Cricket Board (ECB) after lockdown restrictions were eased decided to host West Indies for the scheduled three-match Test series. The schedule was tweaked, and the series was postponed. The two teams will face-off in the first Test at the Rose Bowl in Southampton, starting July 08. England vs West Indies 1st Test 2020: Not James Anderson or Stuart Broad, These Three Players Can Be Match-Winners for the Hosts.

No spectators will be allowed in the stadium as the games will be held in the bio-secure environment. Windies arrived in England a month ago, and after completing their quarantine, they started practice as well. Meanwhile, as England and West Indies get ready to face-off in an exciting three-match Test series, we bring you some records and stats.

Highest and Lowest Team Totals in England in Tests: In 1938, England piled up massive 903 for seven against Australia and then declared. It still remains the highest team total in a Test match innings in England. In 1924, South Africa were bundled out for just 30 runs; it is the lowest Test score in an innings by a team in England.

England Record at Home in Tests: England has played 521 Tests at home and have won 220 out of those with 122 lost and 179 ending in draws. England has an impressive win percentage of 42.22 at home. England vs West Indies 1st Test 2020: Not Jason Holder or Shai Hope, These Three Players Can Be Match-Winners for Windies.

Highest Score by a Batsman in Tests in England: During the 1938 Test at The Oval, Sir Leonard Hutton scored 364 off 847 balls, which included 35 fours. It continues to be the highest individual score in a Test innings in England.

(The above story first appeared on LatestLY on Jul 08, 2020 08:46 AM IST. For more news and updates on politics, world, sports, entertainment and lifestyle, log on to our website latestly.com).