Suraj Randiv ha represented the Sri Lanka national team taking 46 Test wickets (12 matches), 36 ODI wickets (31 matches) and seven T20I wickets (seven) and has a highest international score of 56. He played his last domestic match for Galle CC in April 2019. Following which Randiv moved Down Under and signed a contract with a Premier Cricket club. 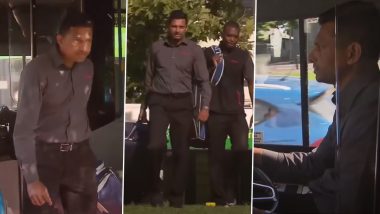 Former International cricketers Suraj Randiv, Chinthaka Jayasinghe, Waddington Mwayenga have changed their career paths and now work as bus drivers in Melbourne for a French-based company known as Transdev. All three had represented their countries at the international level but now play for a local club along with driving busses. Chris Gayle Returns to West Indies T20I Squad After Nearly Two Years for Series Against Sri Lanka.

All three former cricketers were recruited to Transdev, which employs 1200 drivers from diverse professions. Randiv, Jayasinghe and Mwayenga play for local cricket clubs and are hoping that public transports can get their respective cricket teams in the near future.

Suraj Randiv despite his day job, has been very much active as a cricketer in the local circuit and also helped the national team to prepare for their Test against India at the Melbourne Cricket Ground (MCG). ‘I was asked by CA to come and bowl against their bowlers and I didn’t want to miss the opportunity,’ Randiv said.

Kept thinking about how this net bowler has the exact same action as former Sri Lankan office Suraj Randiv and turns out it’s Suraj Randiv himself #AUSvIND pic.twitter.com/qIz6SrZ79Q

Currently, Randiv has been playing cricket for the Dandenong Cricket Club, which is affiliated with Victoria Premier Cricket and takes part in Cricket Australia State Competitions. James Pattinson, Peter Siddle and Sarah Elliot are some of the Australian cricketers how have played for this club.

Chinthaka Jayasinghe represented Sri Lanka in 5 T20Is scoring 49 runs for the national team, He made his debut against India on December 9, 2009. While Waddington Mwayenga was a medium-fast bowler for Zimbabwe playing a solitary Test and three ODIs during 2005 and 2006.

(The above story first appeared on LatestLY on Feb 27, 2021 09:25 PM IST. For more news and updates on politics, world, sports, entertainment and lifestyle, log on to our website latestly.com).