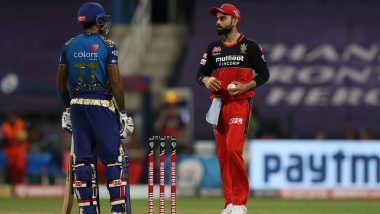 Suryakumar Yadav has been a hot property in the cricketing world lately with fans and experts questioning his absence in the Indian National Cricket Team. Scoring 480 runs in 16 games, the right-handed batsman played a crucial role in guiding Mumbai Indians (MI) to the Indian Premier League (IPL) 2020 title. However, his stellar performances weren’t enough to earn him a berth for India’s upcoming tour of Australia. This resulted in a heated discussion in cricket fraternity with netizens and former cricketers slamming selectors for his omission. Well, the 30-year-old is in the news again but not for right reasons this time. Suryakumar Yadav’s Old Tweets Praising Virat Kohli Go Viral After ‘Death Stare Contest.’

Yadav – who plays under Rohit Sharma in IPL – apparently liked a meme trolling India and Royal Challengers Bangalore (RCB) captain Virat Kohli. The controversial post showcased Rohit standing alone against BCCI selectors, haters and most significantly ‘paper captain’ Virat Kohli. Although Yadav went on to unlike the tweet later, the damage was done as netizens were quick to catch his social-media activity. 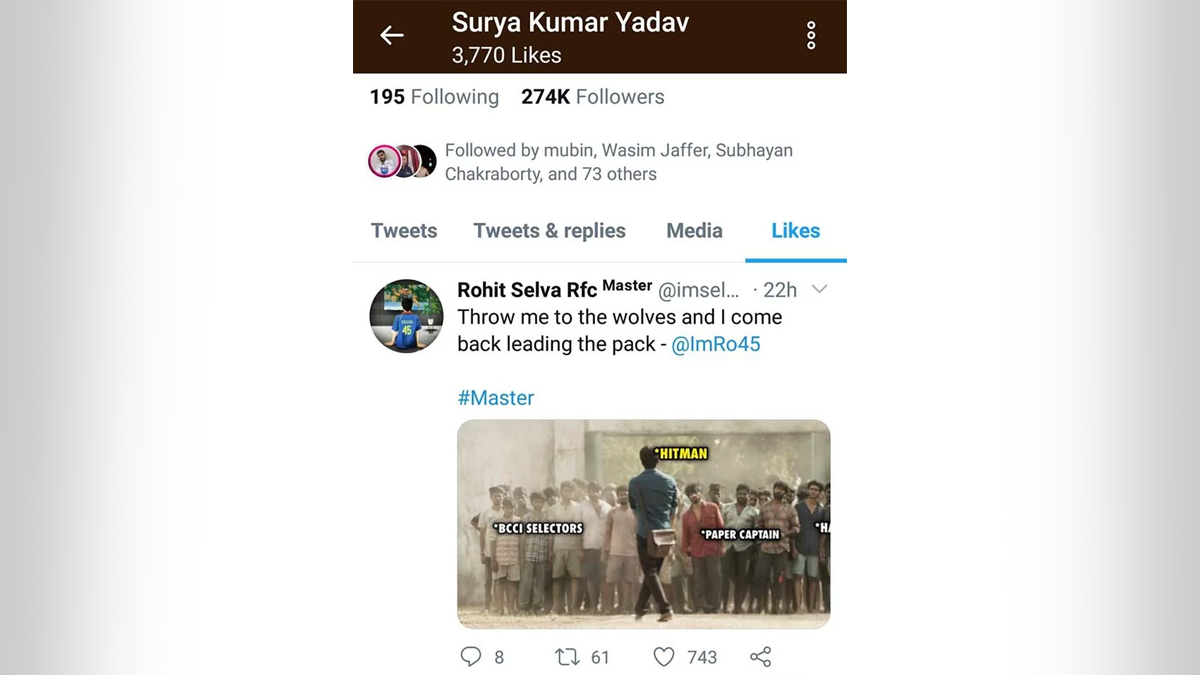 Notably, Kohli and Yadav were involved in a death-stare contest during a league-stage IPL game between RCB and MI this year. While Kohli charged towards the Mumbai batsman to sledge him, Yadav stared him with an expressionless face before going away. Although that incidence seemed to have ignited from the heat of the moment, fans now speculate that Yadav has some grudges with the top-ranked ODI batsman.

As mentioned above, the controversial meme showcased Rohit Sharma’s standing alone against Kohli and BCCI selectors. This also gave rise to speculations that things are not well between the Hitman and the Indian captain. Although rumours of their rift have been doing rounds ever since the 2019 World Cup, Yadav’s recent social-media activity added fuel to the speculation.

Meanwhile, Rohit Sharma – who sustained a hamstring injury in IPL 2020 – is currently under rehabilitation at the National Cricket Academy (NCA) in Bangalore. He hasn’t been picked in the ODI or T20I team but is a part of the Test team. At the same time, expectant father Virat Kohli will fly back to India after the conclusion of the first Test.

(The above story first appeared on LatestLY on Nov 17, 2020 09:06 AM IST. For more news and updates on politics, world, sports, entertainment and lifestyle, log on to our website latestly.com).