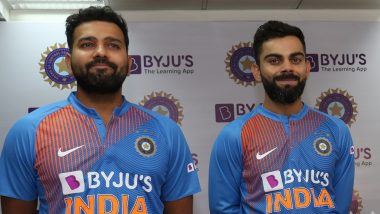 The T20 World Cup which was supposed to be held in 2020 but was postponed due to the outspread of COVID-19 is supposed to be conducted this year. If reports are to believed, the T20 World Cup could be held on October 17 and the finals of the same will be held on November 17. Now, there is also a shift in the venue for the mega-event. This means the teams will battle it out for the glory just 15 days after the IPL 2021.  If reports are to be believed, the T20 World Cup could be held in UAE. T20 World Cup 2020 Update: BCCI Hoping for Formal Postponement of Global Event on Monday at ICC Board Meet.

The Tournament was supposed to be held in India, but the BCCI had also looked at UAE as the backup option keeping in mind the COVID-19 situation in India. It is said that during these i.e October-November, COVID-19 could be at its peak in India and thus the BCCI is considering shifting the venue. The reports further suggest that the BCCI is yet to write to the ICC about the change in venue. As per the current plan, the teams could be divided into two groups and the first round could be conducted in UAE and Oman. The Super 12s could have 30 games which are expected to begin on October 24.

The Super12s could be played across three venues in the UAE – Dubai, Abu Dhabi, and Sharjah. This will be followed by three playoff games – the two semi-finals and the final.

(The above story first appeared on LatestLY on Jun 25, 2021 10:26 PM IST. For more news and updates on politics, world, sports, entertainment and lifestyle, log on to our website latestly.com).