South Africa's white-ball captain Temba Bavuma feels that having an in-form and confident David Miller will give his team confidence ahead of the five-match T20I series against India, starting from June 9. 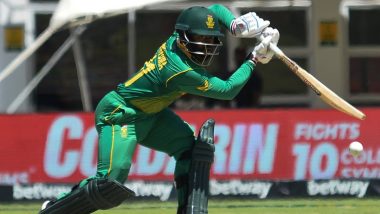 New Delhi, June 4 : South Africa's white-ball captain Temba Bavuma feels that having an in-form and confident David Miller will give his team confidence ahead of the five-match T20I series against India, starting from June 9. The left-handed Miller will be on national duties after carving reputation as a finisher for IPL 2022 champions Gujarat Titans and having his most prolific time with the bat in the tournament, making 481 runs in 16 matches at an average of 68.71 and strike-rate of 142.72. Paul Collingwood Admits England's Test Side Need Time To Play in the Way They Want.

"It's obviously quite pleasing and gives us a lot of confidence to have an in-form and confident David Miller. More so, his performances in the IPL and as a team, we will be feeding off the confidence and knowledge he will bring within the team. The conversation has always been there on David going up the order and facing a lot more balls and can have the opportunity to be a lot more destructive," said Bavuma in a virtual press conference.

One of the most marked improvements of Miller's play in IPL 2022 has been his dominance against spin. Though he has been usually proficient against pace and spin in his career, the numbers from IPL 2022 say that he's performed very well against spin -- 206 runs at a strike rate of 145.07 as compared to 275 runs at a strike rate of 141.02 against pace. Moreover, he averaged 103 against spin as compared to 55 against pace. For South Africa, Miller has mostly alternated between batting at five and six. But at Gujarat set-up, he owned the number five spot. IPL 2022: Mitchell Marsh Disappointed About Delhi Capitals not Making It to Finals.

Bavuma indicated that giving the number five spot to Miller in South Africa's line-up will be considered. "He knows where he fits within our team, the role he plays within the team, which is something he's played quite well over the last while or so. But if the opportunity is there to give David a lot more balls to face, I am sure it will be something that will be considered. "As it stands now, I think he's quite comfortable with the role he plays within the team."

Bavuma further thought that his team's previous familiarity with spinners like Yuzvendra Chahal, Kuldeep Yadav, Axar Patel and Ravi Bishnoi apart from playing in India should help them counter the litmus spin test from the hosts. "It will obviously be a challenge. Playing spin in Indian conditions will always be a challenge. I think it helps that we have played against them a couple of times and also, it helps that we have a better understanding of conditions here in India.

"Guys individually as batters have their individual ways of approaching spin and how they can be successful. For the younger guys, it will be important for the other guys to share their knowledge. The way we have played slower bowling over the last 18 months gives us a lot of confidence and gives us the belief that we can dominate spin bowling and different types of bowling. "So, as much as it will be a challenge, we do belief that we are able to prepare ourselves as well as we can to overcome that challenge."

(The above story first appeared on LatestLY on Jun 04, 2022 06:15 PM IST. For more news and updates on politics, world, sports, entertainment and lifestyle, log on to our website latestly.com).