IPL 2022: Mitchell Marsh Disappointed About Delhi Capitals not Making It to Finals

Australian cricketer Mitchell Marsh has conceded it has been a huge disappointment that his Indian Premier League side Delhi Capitals couldn't make it to this season's playoffs despite things going in their favour till that do-or-die game against Mumbai Indians eliminated them. 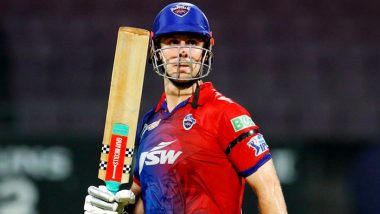 Colombo, June 4: Australian cricketer Mitchell Marsh has conceded it has been a huge disappointment that his Indian Premier League side Delhi Capitals couldn't make it to this season's playoffs despite things going in their favour till that do-or-die game against Mumbai Indians eliminated them. Delhi Capitals needed to beat Rohit Sharma's side in their final league fixture, which would have secured their playoffs berth. But the Ricky Ponting-coached side lost by five wickets and were dumped out of IPL 2022, and Royal Challengers Bangalore sneaked in. Paul Collingwood Admits England's Test Side Need Time To Play in the Way They Want.

Marsh, who overcame a bout of Covid-19 at the start of the lucrative league and gave some commanding performances in the last five games of the season with the Capitals, including a 62-ball 89 performance against Rajasthan Royals on May 11, told Sydney Morning Herald on Saturday how bad he felt after his team failed to make the grade. "It was a shame we couldn't get into the (IPL) finals. I got the real sense for how he (head coach Ricky Ponting) cares for his players and that was probably how he was as a captain and a leader of a team -- it's the way he makes you feel. He made me feel like a really important player for Delhi," said the 30-year-old Marsh. Greg Barclay, ICC Head, Paints Grim Picture of Test Cricket, Says They’ll Get Fewer in Years To Come.

Marsh now wants to take the IPL form into the three-match T20I series against Sri Lanka, beginning on June 7, and subsequently into the five-match ODI series against the Islanders. The Australian added that he would like to continue batting at No.3. "I've loved batting at number three, and I've been there a bit over 12 months now. I certainly feel like that's my best positioning in T20 cricket, and I've loved batting in the power play, I've batted a lot with David Warner and had some great partnerships with him -- it's been really enjoyable.

"Hopefully, I can keep being as consistent as I possibly can at number three and stay up there. International cricket is really hard, but you've got to believe that you belong here, and I think over the last 12 months, I've really gained the belief that my best can match up with anyone in the world," Marsh added.

(The above story first appeared on LatestLY on Jun 04, 2022 05:30 PM IST. For more news and updates on politics, world, sports, entertainment and lifestyle, log on to our website latestly.com).