This Day That Year: When Kapil Dev Scored 175 Unbeaten Against Zimbabwe in 1983 Cricket World Cup Match 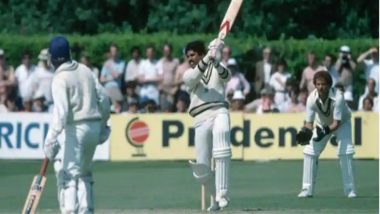 The 1983 World Cup brought us the memorable innings from Indian cricket captain Kapil Dev. Before facing England in the semi-finals, Team India’s must-win encounter against Zimbabwe was remembered for Captain Kapil Dev’s innings of 175 unbeaten. The innings was played on June 18, 1983, thus in the section of ‘This Day That Year’ we shall talk about this particular game. The match was held at Tunbridge Wells. India won the toss, opting to bat first. Little did we know that right within the first hours, our scoreboard would read 17/5. Kapil Dev Birthday Special: Five Breathtaking Performances by India’s First World Cup Winning Captain.

Zimbabwe sent half of the team packing with Sunil Gavaskar and Kris Srikkanth making way to the pavilion on a duck. Mohinder Amarnath (5), Sandeep Patil (1) and Yashpal Sharma (9) followed them sooner. Peter Rawson and Kevin Curran snapped three wickets each and the pacers got good assistance from the deck too Looked as if the Indians had lost the game from here. The onus was on Kapil Dev who kept calm in adversity and started dominating each of these pacers. During the course of his innings, the Indian captain slammed 16 fours and six sixes.

It was almost like the Indian cricket captain bring up his version of T20 cricket as he only played 138 balls to score 175 runs to make India reach a total of 266 runs for the loss of eight wickets. Now the bowlers needed to step up and do their job. Madan Lal scalped three wickets, Roger Binny chipped in with a couple of them. The Indian bowling line-up ran through the batting order of Zimbabwe and they were bundled out for 235 runs. Even the ICC remembered this day and hailed Kapil Dev for the feat. Check out the tweet below:

🌟 Sixes: 6#OnThisDay against Zimbabwe in 1983, Kapil Dev smashed the first century in ODIs for 🇮🇳 in the men's @cricketworldcup 🙌 pic.twitter.com/2r2Mu7l26j

India faced England in the semi-finals, but that game is for later. For now, if you come across any such interesting tweets or records related to the match, feel free to leave your comments below. Coming back to the match, this was truly an incredible game for all the cricket lovers.

(The above story first appeared on LatestLY on Jun 18, 2020 04:02 PM IST. For more news and updates on politics, world, sports, entertainment and lifestyle, log on to our website latestly.com).