During the second ODI, Ben Stokes was in danger while running two runs as Kuldeep Yadav made a direct hit. After checking from various angles, the TV umpire didn’t find conclusive evidence and gave the decision in England’s favour. Indian skipper Virat Kohli looked entirely baffled with the decision as he went to stand-in umpire Nitin Menon to discuss the issue. 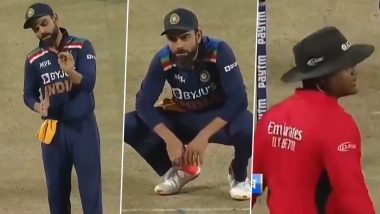 Ben Stokes was at his destructive best in the second ODI against India at the Maharashtra Cricket Association in Pune. The southpaw made a mockery of India’s bowling line-up as the ball was flying all over the park. He, in total, scored 99 off 53 balls as the Brits comfortably 334 runs with six wickets in hands. Apart from his gigantic hitting, Stokes was also in the news for surviving a close run-out call. During the 26th over of the game, the southpaw was in danger while running two runs. Kuldeep Yadav made a direct hit at the striker’s end, and the on-field umpires went upstairs to get the decision. India vs England 2nd ODI 2021 Stat Highlights: Jonny Bairstow Shines As England Level Series With Mammoth Win.

After checking from various angles, the TV umpire, Anil Chaudary, didn’t find conclusive evidence and gave the decision in England’s favour. Indian skipper Virat Kohli looked entirely baffled with the decision as he went to stand-in umpire Nitin Menon to discuss the issue. The 32-year-old is indeed an animated character who got involved in altercations with umpires numerous times. On this occasion, however, the Indian captain received a blunt response. India vs England 3rd ODI 2021 Preview: Likely Playing XIs, Key Battles, Head to Head and Other Things You Need To Know.

After walking to Menon, Kohli sat down on both knees and tried to analyse the decision while trying to discuss with the umpire. However, the latter ignored him completely, showing that he wasn’t interested. Later, nevertheless, Menon said something and Kohli had to walk back for the resumption of play.

Notably, Stokes was batting in the 30’s when this incidence took place and had he been adjudged out, India might have had a better chance of winning the contest. However, that wasn’t the case as the visitors chased the target inside 42 overs and levelled the three-match series 1-1. The third and final ODI takes place on Sunday (March 28), and both teams must leave no stones unturned to emerge victorious.

(The above story first appeared on LatestLY on Mar 27, 2021 07:43 PM IST. For more news and updates on politics, world, sports, entertainment and lifestyle, log on to our website latestly.com).