Some England batsmen were seen running on the pitch in the fag of their second innings in the Chennai Test. Annoyed by the fact, Indian skipper Virat Kohli animatedly complained umpire Nitin Menon and the video of the incident got viral on social media. 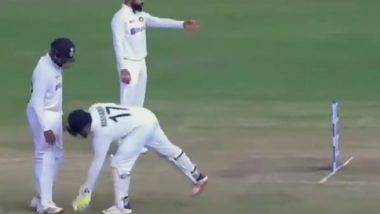 Defying all the odds and expectations, England put up an emphatic show against India in the first Test at the MA Chidambaram Stadium in Chennai. After earning a substantial 241-run lead in the first innings, the Three Lions had the option of enforcing the follow-on, but they decided to bat again. As the track deteriorated with time, Joe Root and Co got bundled out for just 178 runs in their third innings. Notably, some England batsmen were seen running on the pitch in the fag of their innings. Annoyed by the fact, Indian skipper Virat Kohli animatedly complained umpire Nitin Menon and the video of the incident got viral on social media. India vs England Score Updates 1st Test 2021 Day 5.

The English batsmen ran for a single after Jofra Archer hit the ball towards the deep backward point. Kohli, who was fielding at the leg-slip, wasn't amused as he came forward to the umpire and complaint about the opposition batsmen running on the surface. "Oye, Menon (Nitin Menon), seedhe run bhi beech me bhaag raha hai yaar (He's even running easy singles in the middle of the pitch)," the 32-year-old could be heard saying in a viral video. David Llyod Accuses Virat Kohli of Attempting to Influence Umpires.

Meanwhile, India have a daunting at hands as they need 420 runs in the fourth innings to win the game. On the other hand, England have to bundle the home team out on a deteriorated pitch. Notably, Virat Kohli and Co haven't lost a home Test match since February 2017, and they would not want to end their unbeaten streak. At the same time, the visitors must be raring to upset the second-ranked Test team at their fortress.

(The above story first appeared on LatestLY on Feb 09, 2021 11:42 AM IST. For more news and updates on politics, world, sports, entertainment and lifestyle, log on to our website latestly.com).