Washington Sundar entered a unique list after scoring a magnificent half-century during the India vs England 1st Test at the MA Chidambaram Stadium in Chennai. He became the eighth Indian batsman to register a 50+ score in debut innings at home and away. For the unversed, he scored a match-winning 62 in his debut Test innings in Brisbane earlier this year. 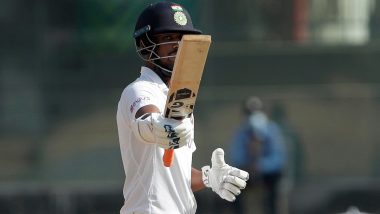 Washington Sundar entered a unique list after scoring a magnificent half-century during the India vs England 1st Test at the MA Chidambaram Stadium in Chennai. After conceding a mountain of 578 runs in the first innings, the home team was reeling at 192/5 when the southpaw came onto bat. Spin twins Dom Bess and Jack Leach were getting assistance from the track while Jofra Archer and James Anderson were bowling with hostility. Amid all the challenges, the 21-year-old put up a batting exhibition and rescued his side with a counter-attacking fifty. In total, he scored an unbeaten 85 off 138 balls as India posted 337 runs. India vs England Score Updates 1st Test 2021 Day 4.

For the unversed, the all-rounder made his debut earlier this year in the fourth and deciding Test against Australia at the Gabba in Brisbane. Apart from scalping three crucial wickets, he scored a match-winning 62 in his debut Test innings.

Although Sundar’s batting master class is earning praises from fans and experts, the all-rounder still has a job in hand with England comfortably placed at the driver’s seat. Gaining a substantial 241-run lead, the Three Lions had a chance to enforce a follow-on. However, they instead decided to bat and would be eyeing to set a daunting target for the home team.  On the other hand, India should look for wickets to stay alive in the contest.

(The above story first appeared on LatestLY on Feb 08, 2021 12:24 PM IST. For more news and updates on politics, world, sports, entertainment and lifestyle, log on to our website latestly.com).