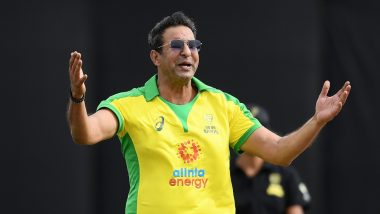 Wasim Akram is one of the decorated cricketers to ever come out of Pakistan and is regarded by many as the best bowler of his generation. Nicknamed as the ‘Sultan of Swing’ Akram played more than 450 matches for his country in Test and ODI formats, taking over 900 wickets in his career for Pakistan. And despite such accolades, the cricketer-turned commentator is not spared by internet trolls. Wasim Akram Reckons Sledging Virat Kohli Would Have Given Him Chance to Dismiss the Indian Captain.

Wasim Akram recently took tom his social media and shared a video especially dedicated to internet trolls and rude people everywhere and gave them a fitting reply. In his clip, the 54-year-old said that only ‘cowards’ abuse people and he feels for them. The retired cricketer also replied to the people who insulted him for going into a swimming pool without his shirt saying ‘next time he would wear a three-piece suit’. Wasim Akram Rates Bowling Quality in PSL Better Than in Indian Premier League, Says ‘In All IPL Teams There Is at Least One Bowler to Attack’.

Morning this video is specially for trolls and rude people before everyone says do not reply to them ,ignore them sure will do after this one #saturdaymorning #haveablessedday🙏 pic.twitter.com/1dcqRIqNso

The pacer is regarded as one of the best bowlers of all time and represented Pakistan from 1984 to 2003. The 54-year-old holds the record of most wickets in List A cricket with 881 and is only second to Sri Lankan Muttiah Muralitharan in terms of ODI wickets, with 502 in total. Akram was also the first bowler to reach the 500-wicket mark in One-Day internationals.

Following his retirement, Wasim Akram has taken the role of a bowling mentor and has been appointed as a bowling coach for several big-name teams in the world, most famous being Kolkata Knight Riders in Indian Premier League. The 54-year-old has also coached bowling at Islamabad United and Multan Sultans in Pakistan Premier League.

(The above story first appeared on LatestLY on Sep 19, 2020 03:49 PM IST. For more news and updates on politics, world, sports, entertainment and lifestyle, log on to our website latestly.com).