Former India all-rounder Yuvraj Singh feels that the team was unable to plan well for the 2019 Men's Cricket World Cup in England. 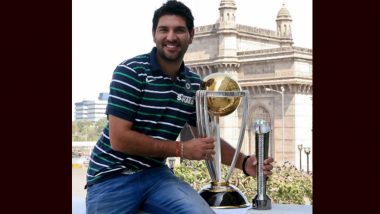 Mumbai, May 4: Former India all-rounder Yuvraj Singh feels that the team was unable to plan well for the 2019 Men's Cricket World Cup in England. Citing the swap between Vijay Shankar and Rishabh Pant for the number four position, Yuvraj pointed out that India could have done better in the tournament if they had an experienced batter at that spot in the batting order. In the run-up to the mega event, India's lack of stability in the middle order, especially at number four slot, was highlighted as one of the major concern areas with experienced batter Ambati Rayudu dropped from the 15-member squad. Annual ICC Rankings 2022: Australia Consolidate Top Spot in Tests, India Are Number One in T20Is, New Zealand On Top Ranked ODI Team.

In the tournament, KL Rahul began batting at number four before Shikhar Dhawan's thumb injury happened against Australia and was subsequently ruled out of the tournament. With Rahul filling in as an opener, Shankar was then brought into the eleven and slotted at four till he got a toe injury and was out of World Cup. Pant, who had played just four ODIs till then and arrived in the tournament as Dhawan's replacement, batted at four till India lost in the semi-finals to New Zealand by 18 runs at Old Trafford, Manchester.

"When we won the World Cup (2011), we all had a set position to bat. I felt 2019 World Cup; they didn't plan it well. They got Vijay Shankar to bat at 4 with just 5-7 ODIs, then they replaced him with Rishabh Pant, who had played 4 ODIs. When we played the 2003 World Cup, Mohd. Kaif, (Dinesh) Mongia and I had already played 50-odd ODIs," said Yuvraj in an interview to Sanjay Manjrekar on 'Home of Heroes' show on Sports18 to be aired on May 7. Yuvraj, who won the 'Player of the Tournament' award when India won 2011 World Cup on home soil, highlighted that India's middle-order problem is present even in T20I format, pointing towards the early exit in Men's T20 World Cup last year in the UAE. "Our middle-order (batsmen) in T20 bats higher in franchise cricket. That is where we lacked in the last T20 World Cup." Sunil Gavaskar Returns Unused Mumbai Plot After 3 Decades.

Yuvraj then revealed his thoughts on future of cricket, saying that the popularity of T20 cricket in present times has forced players to rethink about their priorities. "Test cricket is dying. People want to watch T20 cricket; people want to play T20 cricket. Why would someone play five-day cricket and get five lakh rupees and today play T20 cricket and get 50 lakh? Players who have not made it to international cricket are getting 7-10 crores." Yuvraj signed off by saying that 50-over cricket will struggle for popularity due to T20 cricket being the dominant format of the game. "You watch a T20 game and then watch a 50-over game - it looks like a Test match now. After 20 overs, they are like, 'There are 30 overs to bat!'. So, definitely T20 is taking over everything."

(The above story first appeared on LatestLY on May 04, 2022 06:31 PM IST. For more news and updates on politics, world, sports, entertainment and lifestyle, log on to our website latestly.com).