Yuvraj Singh Praises Stuart Broad, Says 500 Test Wickets is No Joke; You are a Legend 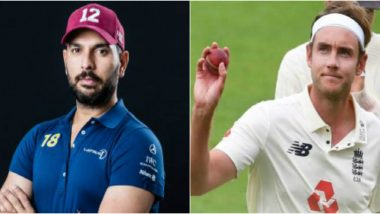 Yuvraj also made a special request to his followers on social media to not make fun of Broad by bringing up the six sixes he hit off the latter's bowling at the 2007 ICC World T20 in Durban. Sachin Tendulkar Congratulate Stuart Broad For Picking 500th Test Wicket.

"I'm sure everytime I write something about Stuart Broad, people relate to him getting hit for 6 sixes! Today I request all my fans to applaud what he has achieved!" Yuvraj said in a tweet.

"500 Test wickets is no joke-it takes hard work, dedication & determination. Broady you're a legend! Hats off," he added.

I’m sure everytime I write something about @StuartBroad8, people relate to him getting hit for 6 sixes! Today I request all my fans to applaud what he has achieved! 500 test wickets is no joke-it takes hard work, dedication & determination. Broady you’re a legend! Hats off 👊🏽🙌🏻 pic.twitter.com/t9LvwEakdT

After sitting out of the first Test against the West Indies in Southampton, which England lost, Broad put on a stunning show with the ball in the final two Tests in Manchester, helping the hosts register a 2-1 series win.

He was named Man of the Series as he ended with 16 wickets in just two matches, the highest among the two teams. On the last day of the third Test, he also became the second Englishman after James Anderson to scalp 500 wickets in the format.

Broad became the second-youngest to achieve the feat as Sri Lanka great Muttiah Muralitharan reached the milestone at the age of 31. However, Broad was the slowest to reach this mark among the special seven as he took 140 Tests to do so.

(The above story first appeared on LatestLY on Jul 29, 2020 01:42 PM IST. For more news and updates on politics, world, sports, entertainment and lifestyle, log on to our website latestly.com).