Led by MS Dhoni, Team India were dominant in the 2011 World Cup and eventually became the first team to lift the glorious trophy on home soil. It was indeed a combined team effort and several players contributed to take India to the summit. 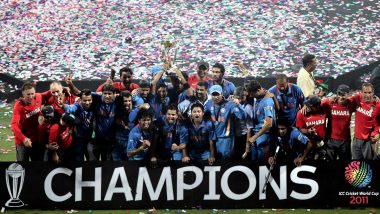 April 2, 2021, marks the 10th anniversary of India’s 2011 World Cup triumph and fans are reliving the historic day with messages on social media. On the occasion, Virender Sehwag, Yuvraj Singh and other members of the World Cup-winning also recalled India’s win.  Led by MS Dhoni, Team India were dominant in the 2011 World Cup and eventually became the first team to lift the glorious trophy on home soil. It was indeed a combined team effort and several players contributed to take India to the summit. While Sachin Tendulkar was the second leading run-scorer of the tournament, Zaheer Khan finished as the joint highest wicket-taker. MS Dhoni, Gautam Gambhir, Yuvraj Singh Hailed on Twitter as India’s 2011 World Cup Triumph Completes 10 Years.

The biggest contribution, however, came from Yuvraj who was suffering from cancer during the mega tournament. Despite his major health issues, the all-rounder unleashed his A-game in the tournament and even earned the Man of the Tournament award. On the day of final, Gautam Gambhir’s fighting 97 was followed by skipper MS Dhoni’s 91 as India defeated Sri Lanka by six wickets to lift the cup at the Wankhede Stadium in Mumbai. Meanwhile, let’s look at how Indian players relived their glory.

April 2: 10 years ago , the moment of a lifetime. #TeamIndia 🇮🇳 pic.twitter.com/mhicAPqDL2

April 2, 2011 - a day when history was created! We wanted to win the WC for India & for the master @sachin_rt who carried the nation’s expectations over decades!

#10years of winning the World Cup, fulfilling the dream of every Indian around the world. It’s such a nostalgic feeling where I can relive each moment of lifting the trophy & making our country proud. It will be cherished forever. #Worldcup2011 #IndianCricketTeam @BCCI 🇮🇳 pic.twitter.com/IFOttlXbUr

Majority of the players from India’s World Cup-winning squad have retired from international cricket while Piyush Chawla, Harbhajan Singh and Indian skipper Virat Kohli are the only active players. Another World Cup, although T20, is set to take place later this year and that too in India. Hence, the Men in Blue would like to replicate their heroics from a decade ago.

(The above story first appeared on LatestLY on Apr 02, 2021 03:08 PM IST. For more news and updates on politics, world, sports, entertainment and lifestyle, log on to our website latestly.com).