Led by MS Dhoni, the Men in Blue didn’t do much wrong in that tournament and became the first side to become World Champions at home. On the day of the finals, India defeated Kumar Sangakkara’s Sri Lanka at the iconic Wankhede Stadium in Mumbai to lift the trophy after 28 long years. 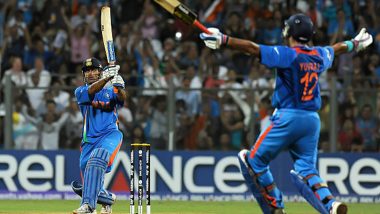 India’s 2011 World Cup triumph completed a decade on April 2 this year (2021) as fans remembered MS Dhoni, Gautam Gambhir and Yuvraj Singh’s magnificent effort in the tournament. Led by Dhoni, the Men in Blue didn’t do much wrong in that tournament and became the first side to become World Champions at home. On the day of the finals, India defeated Kumar Sangakkara’s Sri Lanka at the iconic Wankhede Stadium in Mumbai to lift the trophy after 28 long years. Fans recalled Gautam Gambhir’s fighting 97, MS Dhoni’s blistering 91 in the summit clash as the historic triumph completes ten years. All-rounder Yuvraj Singh was also hailed for his Man-of-the-Series performance in the tournament. This Day, That Year: India Beat Sri Lanka by Six Wickets To Win 2011 Cricket World Cup.

The Men in Blue were under the pump coming into the tournament as they had a forgettable campaign in the 2007 World Cup where they even failed to qualify for the final 8. However, they buried the ghosts of that season and became champions. Master Blaster Sachin Tendulkar, Yuvraj Singh and Zaheer Khan were at their A-game throughout the tournament as India advanced to the finals. The ultimate clash saw an intense battle before India emerged victorious, with Dhoni smashing Nuwan Kulasekara for that iconic six over long-on. Meanwhile, let’s look at how fans recalled the win. IPL 2021: Virat Kohli Reaches Chennai to Join RCB Squad, to Be in Quarantine for Seven Days.

10yrs back on this day India won World cup after 28yrs

"It's Indian captain who is absolutely magnificent today" #MSDhoni#worldcup2011

10 years ago, two of the greatest batsman of their generation helped India win the World Cup after 28 years...#MSDhoni #Gambhir #TeamIndia #worldcup2011 pic.twitter.com/SpSThhViyz

You Can Still Feel These Pics!!

Remembering the day when I was preparing for my board exams on tuition. When i came back to home and switch on the TV. My Man hits the six, India Lifts the Trophy 😍🏆

Next day I went to write my maths exam, coincidentally i scored 91* 🏏😂❤️#MSDhoni | @MSDhoni | #WhistlePodu

In 2012, the coach of the Sri Lankan team who played that WC final in 2011 was also with KKR, and he told us that the man who took the game away from them was Gautam Gambhir.

Never gets his due for one of the great World Cup knocks under pressure!

That Dirt On the Jersey!!

#OnThisDay Gautam Gambhir scored 97 runs in the final game. That dirt on his jersey says it all, one of the biggest reason behind #WorldCup2011 #TeamIndia pic.twitter.com/V5ccyp75c9

Not To Forget Zaheer Khan!!

His 21 wickets in tournament is real unsung thing.

The MAN WHO PLAYED WITH LIFE FOR DREAMS OF BILLIONS.

#2011WorldCup #yuvrajsingh @YUVSTRONG12 he know that he have health issues even though he played the all the matches and he is the player of the tournament #YuvrajSingh pic.twitter.com/0t2y1SqYSC

The 2011 World Cup was indeed the beginning of the revolution as Team India didn’t look back. They kept on producing World-class players and registered one memorable victory after another. As of now, India, under the leadership of Virat Kohli, are the top-ranked Test team while are holding the second place in the ODI and T20I rankings.

(The above story first appeared on LatestLY on Apr 02, 2021 09:00 AM IST. For more news and updates on politics, world, sports, entertainment and lifestyle, log on to our website latestly.com).