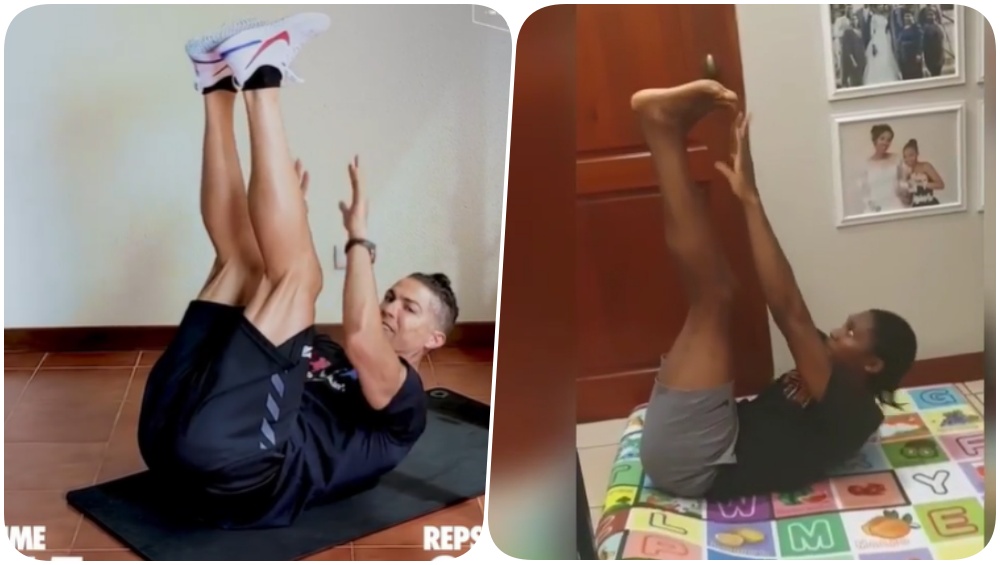 Olympian Caster Semenya has beaten Cristiano Ronaldo at the Nike Living Room Cup Challenge. Yes! You read it right! The Olympian from South African performed 176 reps in 45 seconds whereas the five-time Ballon d’Or winner registered a record of 145 repetitions in 45 seconds. Semenya posted the video on social media and also trolled CR7 by saying he tried his level best. Cristiano Ronaldo is currently in Madeira in Portugal to visit his ailing mother and amid the lockdown all across due to the menace of coronavirus, and remains there with his kids and girlfriend Georgina Rodriguez. Cristiano Ronaldo Registers Impressive Record in Living Room Cup Challenge, Bruno Fernandes Fails to Go Beyond 117 Reps (Watch Videos).

But despite being away from live-action, the Juventus star is doing his best to keep himself in the best of shape. Thus, he introduced the Nike Living Room Cup Challenge where he urged the netizens to display their core strength. Manchester United’s Bruno Fernandes took up the challenge but could not go beyond 117 reps in 45 seconds. also tried his hands but could not go beyond 110. But this Olympian from South Africa crashed Ronaldo’s record and even trolled CR7 in the caption by saying that, "The beast himself did his best." Check out the videos below:

Hola fellas thanks to @cristiano for his challenge, the beast himself did his best, I also manage to scoop 176 in that space of 45 seconds. Not bad for a Sunday ke ya baba mfo #nikelivingroomcup #playinside #playfortheworld @nike @cristiano

Hey guys, I have a new challenge for you to stay active: the Living Room Cup 🏆. Can you step up and beat my core crusher record? Show me what you got and use #livingroomcup #playinside @nike @cristiano so I can 👀 you!

Talking about Semenya, she has won gold in the women's 800 metres at the 2009 World Championships with a time of 1:55.45, the 2016 Summer Olympics, and the 2017 World Championships in her new personal best, 1:55.16. On the other hand, Ronaldo is waiting for the Serie A season to begin soon which had been brought to a halt due to the menace of coronavirus.