The duo got involved in a controversy over a 2019 video where they were seen laughing at Asian workers who had come to their hotel room to repair a television. 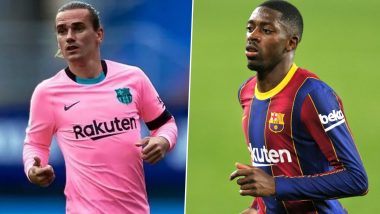 France and Barcelona striker Antoine Griezmann and Ousmane Dembele have issued apologies for their racist comments in a video shot way back in 2019 but denied making any racist remarks. Dembele had recorded the video which showed both of them laughing at Asian workers, who had come to their hotel room to repair a television. Taking to Instagram, the former Borussia Dortmund player posted an Instagram story, where he wrote, “It all took place in Japan. It could’ve taken place anywhere on the planet and I would’ve used the same expression. I was therefore not targeting any community. I just happened to use this type of expression with my friends regardless of their origins."Antoine Griezmann, Ousmane Dembele Involved in Racism Row After Video Leaks Online

Griezmann also explained his stance on this issue, with a tweet stating, "I have always been committed against any form of discrimination. For the past few days, some people have wanted to pass me off as the man I am not. I firmly refute the accusations made against me and I am sorry if I could offend my Japanese friends."

The French duo were part of the French team which got knocked out of Euro 2020 by Switzerland in the round of 16. Dembele was earlier injured during the group stages and was subsequently ruled out of the competition.

(The above story first appeared on LatestLY on Jul 06, 2021 05:46 PM IST. For more news and updates on politics, world, sports, entertainment and lifestyle, log on to our website latestly.com).