The Barcelona duo were seen behaving in a racist manner towards Asian workers, who had come to their room to fix a television. France were unceremoniously knocked out of Euro 2020 by Switzerland, on penalties. 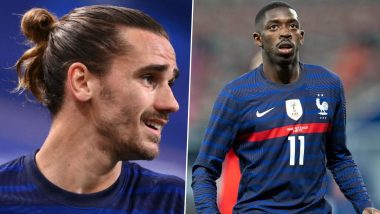 France and Barcelona players Antoine Griezmann and Ousmane Dembele's actions have come under the scanner for their behavior, which allegedly appears to be racist in nature towards some Asian workers in their room, in a video which has leaked online. The two football stars appear to be mocking the workers, who are technicians and were fixing a television in their hotel room. The French football team were unceremoniously knocked out of the Euros this year by a spirited Switzerland side, who edged the 2018 World Cup winners of penalties.  Following the exit, reports of problems within the French camp, involving players like Adrien Rabiot, Paul Pogba and Kylian Mbappe emerged.  Kylian Mbappe Reacts After Missing Out on Penalty During France vs Switzerland, Euro 2020 (Watch Video)

The video, which reportedly was shot by Dembele during Barcelona's pre-season tour to Asia in 2019, reveals the following things said by the former Borussia Dortmund star. "All these ugly faces, just so you can play PES (Pro Evolution Soccer), aren’t you ashamed?,” he said to Griezmann before adding, "What kind of backward language is that?” and “Are you technologically advanced in your country or not?”

Griezmann wasn't heard in the video but he was seen smiling throughout the clip. The Barcelona attacking duo were part of the French squad in Euro 2020. In what can be termed as a coincidence, Japanese retail company Rakuten has been Barcelona's main sponsors since 2016. The video, which leaked online, attracted a lot of flak online with some asking the French Football Federation to take instant action against the duo.

For Griezmann, this isn't the first time that he has engaged himself in a controversy surrounding racism. He had drawn a lot of criticism in 2017 when he turned up to a fancy dress party by painting his skin black.

Racism has been one of football's biggest concerns in recent times with a number of players including Arsenal's Pierre Emerick-Aubameyang and Inter's Romelu Lukaku, being victims of it.

(The above story first appeared on LatestLY on Jul 05, 2021 09:21 PM IST. For more news and updates on politics, world, sports, entertainment and lifestyle, log on to our website latestly.com).