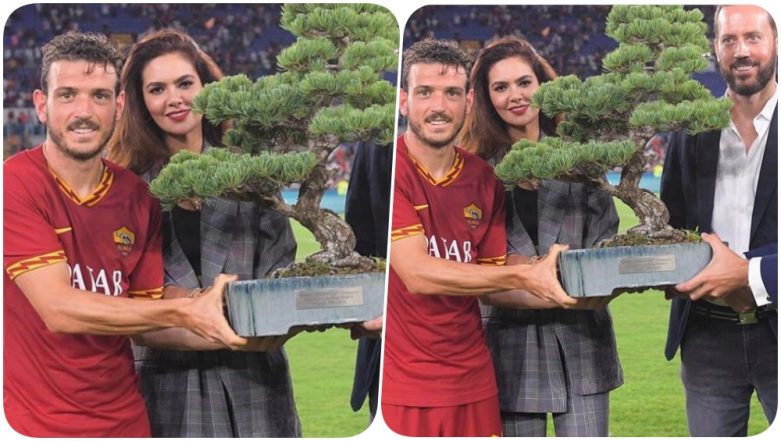 AS Roma and Real Madrid played the club friendlies ahead of the much-awaited La Liga 2019 season, the clubs played the Mabel Green Cup 2019. The game between Roma and Real Madrid ended with the former winning the game by 5-4 on penalties but it was Esha Gupta who walked away with the pie as she became the first Indian to attend the event. The Mabel Green Cup was held at the Stadio Olimpico at Roma. AS Roma vs Real Madrid Free Live Streaming Online and Match Time in IST: How to Get Live Telecast on TV & Football Score Updates of Club Friendlies Football Match in India?

The actress not only handed away the winning trophy to AS Roma's Alessandro Florenzi but was also seen attending the press conference. The official page of Mabel Green shared the images of Esha Gupta handing over the tree trophy but also the actress shared a few images on social media. The game was played to increase awareness about our environment and promoting sustainability. Check them out below:

💥Congratulations @officialasroma for winning the first edition of the #MABELGREENCUP 🙌🏼 ♻️

Talking about the game, Real Madrid started off on a good note by scoring a goal quite early in the game. Marcelo Vieira scored a goal in the 19th minute. Diego Perotti from AS Roma scored an equaliser at the 34th minute. Casimiro gave a lead to the team after he netted a goal at the 39th minute. Edin Dzeko from Roma brought the game to 2-2 by a goal at the 40th minute. In the end, the game was decided by penalties and AS Roma walked away with the last laugh.