AS Roma vs Real Madrid Free Live Streaming Online and Match Time in IST: How to Get Live Telecast on TV & Football Score Updates of Club Friendlies Football Match in India? 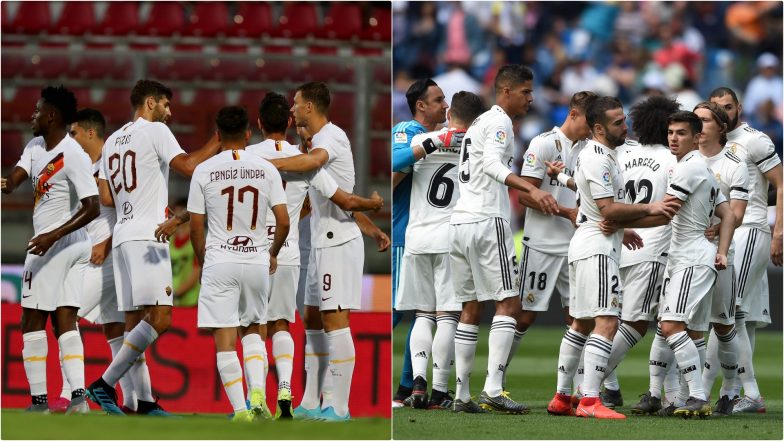 AS Roma vs Real Madrid Free Live Streaming Online and Match Time in IST: Back to back wins have lifted some of the gloom that existed over the Real Madrid’s pre-season campaign and now the whites are ready to play AS Roma in their last scheduled friendly. It is never easy for any team, particularly those ringing in changes to their squad, to gel instantly. The players need time to settle down, and Zinedine Zidane will be confident of a better day ahead. The last time the Los Blancos visited AS Roma, they ran out 2-0 winners in the Champions League group stage of 2018/19 season. The Italian side often does not get its act together when playing the record European champions. You will find below everything from AS Roma vs Real Madrid, club friendlies free live streaming online, live telecast on TV and football score updates. Real Madrid in Race With Rival Barcelona to Sign PSG Striker Neymar, Say Reports.

Eden Hazard has been handed the iconic no 7 at Real Madrid which some of the greatest names like Cristiano Ronaldo and Raul have worn. It only adds to the expectation from the Belgian skipper and after last weeks beautiful maiden goal, the pressure must have eased a bit. Sergio Ramos and Raphael Varane seem to be getting back to their usual self after a disastrous few games in pre-season. Karim Benzema and Isco are in contention to line-up alongside Hazard in the front three with Toni Kroos pulling strings in midfield. Cristiano Ronaldo Welcomes his Former Real Madrid Teammate Danilo Luiz as he Joins Juventus (Watch Video).

AS Roma have been in talks with Manchester United to get Alexis Sanchez on board, which will be a massive lift for both parties. With Eden Dzeko certain to leave for Inter Milan, he is not likely to play any part against Real Madrid. Lorenzo Pellegrini in midfield is probably the most talented man on the field for the Italian outfit and can give Casemiro and company a run for their money. Chengiz Under on the wings is Roma’s best bet going forward with the Turkish youngster full of pace and trickery.

Italian club AS Roma host La Liga side Real Madrid for a pre-season friendly game at Stadio Olimpico, a sports facility in Rome, Italy. AS Roma vs Real Madrid game will have a start time of 11.30pm on August 10, Saturday.

Where to Watch the Live Telecast of  AS Roma vs Real Madrid, Club Friendlies Football Match? TV Channels in India

Sadly, these club friendlies are not broadcasted in India. Real Madrid and AS Roma fans in the country will not be able to enjoy the match live on any television channel.

How to Watch the AS Roma vs Real Madrid, Free Live Streaming Online and Football Score Updates of Club Friendlies Football Match?

One can enjoy AS Roma vs Real Madrid game on GHD Sports app. One will also have to depend on live score updates brought in by official social media handles of Real Madrid and AS Roma, as there is no official platform providing live stream options.

It should be an open game with both sides going for the kill and with the kind of form real Madrid showed in the last match, the Spanish side should come away with a routine victory.