FC Barcelona are likely to be without central defender Samuel Umtiti for the rest of the season after the French international began treatment to try and resolve ongoing problems with his left knee. 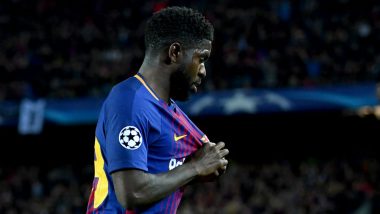 Madrid, July 4: FC Barcelona are likely to be without central defender Samuel Umtiti for the rest of the season after the French international began treatment to try and resolve ongoing problems with his left knee.

The club issued a brief communique explaining that Umtiti had started "a conservative treatment" on his knee, but didn't indicate how long he will be out, although the Spanish press speculate he could be sidelined for up to six weeks, reports Xinhua news agency.

It is thought that the medical staff at Barcelona would prefer Umtiti to have an operation to try and resolve the problems which have dogged him for the past two seasons, but the 26-year-old has so far refused that option.

Umtiti's aim is to be available for the return leg of Barca's Champions League last-16 tie against Napoli at a date that has yet to be established, but until then, under-pressure Barca coach Quique Setien will have to hope that neither veterans Gerard Pique nor Clement Lenglet get injured, as the only replacement now is 21-year-old B-team player Ronald Araujo.

Elsewhere, Real Sociedad have lost Belgian international Adnan Januzaj for the last five games of the season after the winger was forced out of their 2-1 win at home to Espanyol on Thursday night.

Tests have shown Januzaj has a grade two tear in his right thigh, and with just over two weeks left to play, it looks as if his campaign is now over.

(The above story first appeared on LatestLY on Jul 04, 2020 10:05 AM IST. For more news and updates on politics, world, sports, entertainment and lifestyle, log on to our website latestly.com).