FIFA president Gianni Infantino has clarified at the 72nd FIFA Congress in Doha, Qatar that the global football governing body has not proposed a biennial World Cup and it needs more time to discuss. 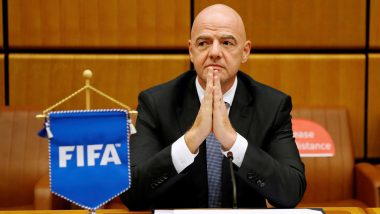 Berlin, April 1 : FIFA president Gianni Infantino has clarified at the 72nd FIFA Congress in Doha, Qatar that the global football governing body has not proposed a biennial World Cup and it needs more time to discuss. Speaking about the speculations on the biennial World Cup on Thursday evening in Doha, Infantino said the world football governing body has not made a proposal to change the global calendar.

"The last FIFA congress asked the FIFA administration with a vote, and 80 per cent voted in favour to study the feasibility of the World Cup every two years," said Infantino. "FIFA came to the conclusion that it is feasible and it would even be positive for a big part of the world. But there is also a big opposition to it due to the repercussions and impacts." FIFA is not in a hurry to make the final decision and Infantino believed it still needs some time to debate, discuss and convince, and FIFA is trying to find agreements and compromises with all parties involved, Xinhua reports. Mason Greenwood Remains Suspended by Manchester United Despite Club Website Still Having Player’s Profile, Red Devils Issue Statement.

"We're looking at all different options. If we find an agreement in one week, it is great; if we find it in one year, it's great as well," said the 52-year-old world football leader. "We could go for a vote and get the majority to vote for more competitions. But we are aware that it's more important to exchange views." In addition to the confederations and the member associations, FIFA also needs the support and feedback from the leagues, the clubs and players as well. "We have to do this in balance with the clubs, which is the biggest part of where the players are playing," said the president. "We'll find what is more suitable for everyone. The big ones have to become bigger and the small ones have to benefit as well."

The Swiss-Italian official believed the biennial World Cup would give more chances to the young talents and create more hope for the people in football developing regions. However, the proposal has been heavily criticised for ignoring the well-being of players and risks overexposing the World Cup, reducing the exclusivity of the tournament. "Some 100 years ago, some wise men decided that the World Cup should take place every four years. Let's see what we can do better and how we can do better," said Infantino. "We're not in a rush. We have to think about what is best for the development of football. It's better to take a bit more time to do it."

(The above story first appeared on LatestLY on Apr 01, 2022 11:10 AM IST. For more news and updates on politics, world, sports, entertainment and lifestyle, log on to our website latestly.com).