The young striker was suspended by Manchester United in January this year after he was accused of rape and physical assault by girlfriend Harriet Robson. Robson had shared disturbing pictures and audio notes of Greenwood's violence on her. 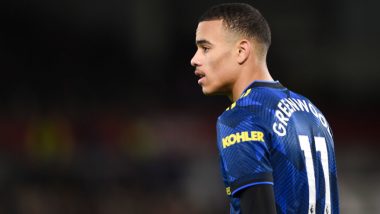 Manchester United have stated that suspended player Mason Greenwood's status at the club hasn't changed with the striker's profile still being shown on the official website. Manchester United's official website still describes the player as, "An exciting striker who has been well ahead of schedule in terms of his progress through the ranks at United and has made a huge impact in 2019/20." Greenwood was suspended by Manchester United after he allegedly raped and physically assaulted his girlfriend Harriet Robson, who had shared disturbing pictures and videos about the same on social media. Teenager Jailed for Racially Abusing Manchester United Footballer Marcus Rashford

The club released a statement on this after fans spotted Greenwood's profile still on the official website. The statement explained why Greenwood's profile remained on the website and was removed from the app. "There has been no change whatsoever in Mason’s status. We removed his profile from the club app soon after he was removed from the squad in January. This was in order to remove Mason from interactive elements of the app, such as team predictions, etc," the statement read.

"However, his profile was never removed from the website as he remains a Manchester United player, albeit not currently part of the squad while the legal process unfolds," it added. Greenwood was arrested by the Greater Manchester Police following such allegations of rape and assault surfaced on social media. Greenwood had also lost all sponsorships after this incident.  He was interrogated but was released on bail subsequently. According to reports, the expiration date of that bail is April 30 but it can be extended.

(The above story first appeared on LatestLY on Mar 31, 2022 10:47 PM IST. For more news and updates on politics, world, sports, entertainment and lifestyle, log on to our website latestly.com).