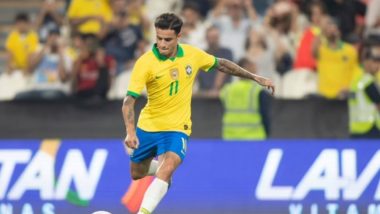 After losing against Argentina by 1-0, tea Brazil today played an international friendly match against South Korea at the Mohammed bin Zayed Stadium in Abu Dhabi. It was Lucas Paqueta, Philippe Coutinho and Danilo who helped Brazil seal a 3-0 win against South Korea. Right from the start of the game, it was Brazil who had edged out their opponents and proved to be better in every department of the game. From ball possession to passes team Brazil dominated the game. Philippe Coutinho who has been under the scanner for his form, marked his comeback. BRA vs KOR, International Friendly 2019 Match: From Philippe Coutinho to Heung Min-Son, 5 Players to Watch Out for in Brazil vs South Korea Football Game.

Brazil did go hunting the fourth goal but was not very successful in doing the same. It wouldn't be wrong to say that the team was not tested throughout the match

(The above story first appeared on LatestLY on Nov 19, 2019 09:29 PM IST. For more news and updates on politics, world, sports, entertainment and lifestyle, log on to our website latestly.com).