BRA vs KOR, International Friendly 2019 Match: From Philippe Coutinho to Heung Min-Son, 5 Players to Watch Out for in Brazil vs South Korea Football Game

Brazil have enough talent in the squad to overcome the South Korean challenge provided they do not let their guards down as they have been doing it in the past few games. 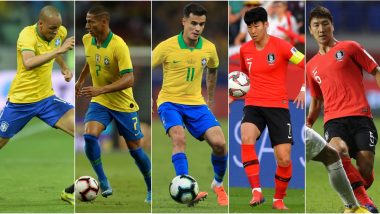 After a disappointing defeat at the hands of Argentina, Brazil are looking forward to the game against South Korea in an all-important game on November 19 (Tuesday). BRA vs KOR clash is a must-win for Selecao considering they have not won a football game in months. The flair associated with Brazilian football is missing from this side and fans are getting sick and tired watching their dire displays on the pitch. Tite will be looking to tweak a few things against South Korea, but it will be down to the players to play to their true potential. Some of these players play week in week out for their clubs without any drop in standards but are struggling to replicate the same for their national team. For South Korea, they have a good mixture of youth and experience in their squad and could Brazil a run for their money. A look at the players to watch out for in the Brazil vs South Korea (BRA vs KOR) international friendly 2019 match. How to Watch Brazil vs South Korea International Friendly 2019 Live Streaming Online? Get Free Live Telecast of BRA vs KOR & Football Score Updates on TV in India.

An absolute beast in the forward, Heung Min-Son is South Korea’s best player in recent memory. He is fast and direct and could trouble the Brazilian defence with his runs into the box. He will likely start on the left of midfield and try and create openings for his strikers.

The central midfielder knows he is up against a Brazilian side that has some of the most technically adept players in their ranks. Jung Woo-Yong has to track the runs of the Selecao strikers and try and break their play with each opportunity possible.

The central midfielder could provide the much-needed freshness in midfield for Brazil with Casemiro dropping out. He has been in top form for Liverpool in the English Premier League, and Brazil could do with his positional sense and creativity against South Korea.

Everton forward Richarlison has immense potential, and Tite could hand him a start in place of Gabriel Jesus. He not only likes to take on the opposition with his direct runs, but he is equally good in the box with his precision finishing.

The Bayern Munich man is the heart and soul of this Brazil team, particularly in the absence of Neymar. He has not been his usual self in the last few games for the national side, but a player like him cannot be contained for long.

Brazil have enough talent in the squad to overcome the South Korean challenge provided they do not let their guards down as they have been doing it in the past few games.

(The above story first appeared on LatestLY on Nov 19, 2019 02:55 PM IST. For more news and updates on politics, world, sports, entertainment and lifestyle, log on to our website latestly.com).