Bugatti La Voiture Noire Facts: All Things to Know About the World’s Most Expensive Car Purchased by Cristiano Ronaldo 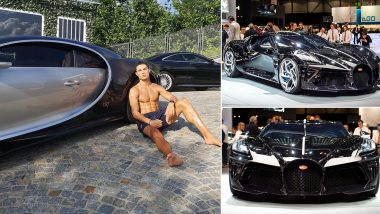 Ronaldo shared a picture of the car on his Instagram page and captioned it “You choose the view.” Ronaldo was seen sitting on the pavement and was leaning on the car in the picture. The Bugatti La Voiture Noire is the latest addition to the envious collection of expensive cars in the Portuguese’s garage. He already owns other collections of the Buggati brand. Take a look at some things to know about Ronaldo’s latest car collection.

Bugatti La Voiture-Noire is the most expensive car in the world and is priced $18.68 million (Rs 132 crore). It was first introduced a year ago at the Geneva International Motor Show and only 10 pieces of the vehicle have been produced so far. An 11th piece will be produced and delivered to Ronaldo by 2021.

The above sentence is a French word for “The Black Car.” The car pays homage to the fourth, all-black 57SC Atlantic, which was one of the most coveted classic cars in the world but has missing since the Second World War. It is a unique supercar made from the carbon fibre. The design of the Noire is a modern take on the Type 57 SC Atlantic from the 1930s. According to a report from The Gear, “this vehicle was created specifically for a Bugatti enthusiast who was “fascinated by the Atlantic.”

The car packs 1,500 horsepower and 1,180 pound-foot of torque that propels it from 0 to 60 mph in 2.5 seconds. It has a quad-turbo W-16 engine with a top speed of 261 mph. Bugatti limited the La Voiture Noire’s top speed to give it more touring refinement.

The Bugatti La Voiture Noire takes approximately two years to be built and be fully functional. So the customer after making the order will only have the car available on his/her doorstep after a wait of two years. This was confirmed by Tim Bravo, Bugatti’s head of communications.

(The above story first appeared on LatestLY on Aug 03, 2020 09:05 PM IST. For more news and updates on politics, world, sports, entertainment and lifestyle, log on to our website latestly.com).