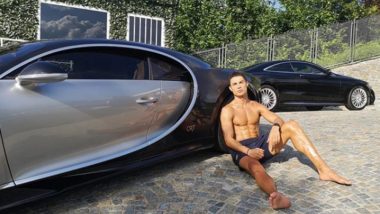 Breaking and making records is a part of Cristiano Ronaldo’s day-to-day routine and do that, the ace striker doesn't really needs to be on the field . To celebrate Juventus’ 36th Serie A triumph, the Portugal star bought the brand-new Bugatti La Voiture Noire which is the most expensive car in the world. CR7’s new toy is as fantastic as his strikes and it's price isn’t normal either. Bugatti La Voiture Noire is worth around a whooping 18.68 million dollars (132 crore approximately). Notably, only 10 models of this luxurious supercar have been produced by Bugatti which makes it extremely limited edition. Cristiano Ronaldo Poses With Gianluigi Buffon After Winning Serie A 2019-20.

The new La Voiture Noir comes with an staggering engine of 1,500 horsepower and torque of 1,180 pound-foot. This car can reach 0 to 60 mph in mere 2.5 seconds while its top speed is 261 mph. Ronaldo also posted a picture on Instagram in which he can be seen posing with his new beast which is extremely stylish. “You choose the view,” wrote the legendary footballer while sharing the pic. Have a look. Cristiano Ronaldo Shares Picture With Serie A Trophy.

Notably, La Voiture Noir is not the first member of the Bugatti family to grace Ronaldo’s garage. The legendary striker also owns a Chiron, Veyron and Centodieci. Apart from that, the Juventus also has Phantom Rolls-Royce, Lamborghini Aventador, Ferrari F430 and many other fantastic cars.

Speaking of Ronaldo’s performance in the recently concluded Serie A, the five-time Ballon d’Or winner registered 31 goals from 33 outings and played a key role in guiding Juventus to their ninth successive Serie A title. CR7 will next be seen in the UEFA Champions League 2020 where he’ll aim to guide the Old Lady to yet another title.

(The above story first appeared on LatestLY on Aug 03, 2020 06:11 PM IST. For more news and updates on politics, world, sports, entertainment and lifestyle, log on to our website latestly.com).