Cristiano Ronaldo shared a super-romantic picture with girlfriend Georgina Rodriguez on Instagram wishing the model on her birthday. ‘Felicidades ao amor da minha vida (cheers to the love of my life)’ the 35-year-old wrote while sharing a lovely of the couple. 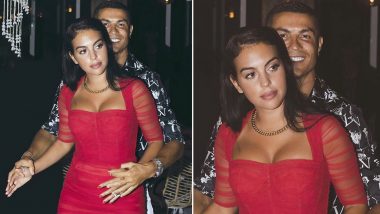 Cristiano Ronaldo shared a super-romantic picture with girlfriend Georgina Rodriguez on Instagram wishing the model on her birthday. The couple have often shown their love for the other on social media platforms by sharing pictures with and of each other. The couple met in 2015 at a clothes store in Madrid and quickly began dating. Cristiano Ronaldo Fuels Marriage Speculations After Girlfriend Georgina Rodriguez Posted Couple’s Photo With Caption ‘Yess’.

Cristiano Ronaldo had recently shown his love for Georgina Rodriguez after scoring a goal against Udinese in a Serie A encounter earlier this month. After Ronaldo scored the first goal in the Juventus victory, he signaled ‘G’ with his fingers in a tribute to his partner.

The couple sparked engagement rumours when back in August, Georgina Rodriguez shared a couple of photos showing off a ring on her finger. Cristiano Ronaldo and Rodriguez were on a romantic getaway in Ibiza and after returning, the couple shared clips from a party with their family, friends, which many believe was their engagement party.

Telling Piers Morgan of the couple's ‘true love’ on ITV last year, Ronaldo said ‘he helped me so much. Of course, I’m in love with her. We’ll be [married] one day, for sure. It’s my mum’s dream as well.’

(The above story first appeared on LatestLY on Jan 27, 2021 08:00 PM IST. For more news and updates on politics, world, sports, entertainment and lifestyle, log on to our website latestly.com).