The Portugal star is close to agreeing on a lucrative deal with the Saudi outfit after he parted ways with Manchester United following a controversial interview with Piers Morgan. The player is currently in action at the World Cup in Qatar. 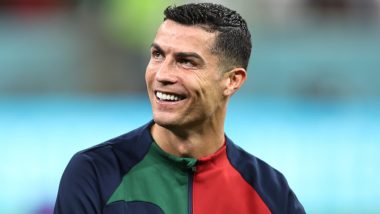 Cristiano Ronaldo has reportedly decided where his next destination is, after mutually parting ways with Manchester United. The star forward slammed Manchester United in a controversial interview with Piers Morgan, which was released in parts 1 and 2 and subsequently, the Red Devils terminated his contract in a mutual agreement. While many fans are speculating which would be the former Real Madrid forward’s next destination, the player seems to have already made up his mind. Adidas Confirm It Wasn’t Cristiano Ronaldo’s Goal During Portugal vs Uruguay FIFA World Cup 2022 Match

According to a report in Marca, Ronaldo is close to agreeing on a two-and-a-half-year deal with Saudi Arabia club Al Nassr, which would see him earn £ 172.9 million per year. Ronaldo had earlier rejected an offer from Saudi Arabia in the summer where he reportedly had pushed for a move away from Manchester United in order to compete in the Champions League. But with several reports claiming that top European clubs not interested in signing the forward, Al Nassr seems to be his next destination. Ronaldo has not signed the deal though with him currently focused on the World Cup. Argentina Football Team Fan Smashes TV After Lionel Messi's Goal Against Mexico at FIFA World Cup 2022 (Watch Viral Video)

One of Saudi Arabia’s most successful clubs, Al Nassr have won league titles nine times, the latest of which was in 2019. Ronaldo, in the interview with Morgan, had stated that he had no respect for head coach Erik ten Hag and said that people in the club wanted him gone. United ended their association with the player who did not receive his payoff from the club after his exit.  Currently a free agent, Ronaldo currently is on national duty for Portugal, who have made their way into the last 16 of the FIFA World Cup 2022 with a 2-0 win over Uruguay in their last group stage match.

(The above story first appeared on LatestLY on Nov 30, 2022 06:04 PM IST. For more news and updates on politics, world, sports, entertainment and lifestyle, log on to our website latestly.com).