Cristiano Ronaldo vs Zlatan Ibrahimovic: Two Stalwarts To Take on Each Other on This Date, Check Full Serie A 2021-22 Fixtures 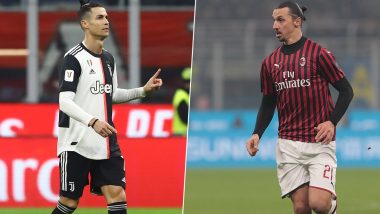 However, they lost the match back then, but fortunately, Bianconeri could book a spot in the Champions League 2021-22. Talking about Cristiano Ronaldo, for a long time now, it is said that Cristiano Ronaldo might not stay with Juventus and could make a move to PSG or Manchester United. But reports also suggest that CR7 could stay with Juventus for this season. Also, Zlatan's spot at AC Milan looks fixed as the former Manchester United player has left a huge impact on the team with his presence. AC Milan also made its way into the Champions League 2021-22 after quite a long time. So for now if things remain the same, the fans can relish the battle between Zlatan and Ronaldo on September 19.

Serie A took to social media to announce the fixtures for the upcoming season.

For this season, Juventus must be looking to turn the tables and win the Serie A 2021-22 trophy as the team lost the title last year after nine long years. Cristiano Ronaldo emerged as the highest goal-scorer in the league but could not help his team win the title. The team has hired a new manager in the form of Maurizio Sarri after Andrea Pirlo got sacked last year.

(The above story first appeared on LatestLY on Jul 15, 2021 10:57 AM IST. For more news and updates on politics, world, sports, entertainment and lifestyle, log on to our website latestly.com).