The 50-year old claimed responsibility for the loss, stating that it was he who chose the penalty-takers. Southgate also backed Saka, calling him a super boy after the Arsenal youngster had an impressive tournament. 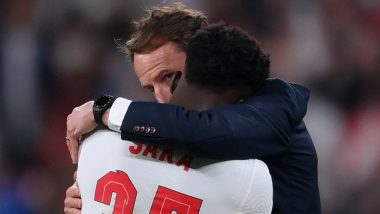 England manager Gareth Southgate backed his team and claimed responsibility for his side's painful defeat at the hands of Italy in the Euro 2020 final at the Wembley Stadium on Monday. Marcus Rashford, Jadon Sancho and Bukayo Saka missed penalties for England in the shootout as they fell to a 2-3 defeat and Southgate, while speaking to the media, said that it was he  who chose the order of the ones who'd take the penalties. "That is my responsibility,” he said, adding, "I chose the guys to take the kicks. I told the players that nobody is on their own in that situation. We win and lose together as a team. They have been tight throughout and that’s how it needs to stay. It is my decision to give him [Saka] that penalty. That is totally my responsibility. It is not him or Marcus or Jadon. We worked through them in training. That is the order we came to." Manchester United Show Support for Marcus Rashford After He Missed Penalty in Euro 2020 Final Against Italy, Check Post

He further stood out in support for his players, saying that they aren't on their own and that they were a team in victory and even in defeat, saying, "What they have to know is none of them are on their own. We win and lose as a team. Penalties are my call. We worked in training. It’s not down to the players. Tonight it hasn’t gone for us. We know they were the best takers we had left on the pitch. Of course it’s going to be heartbreaking for the boys but they are not to blame for that.”

Southgate had words of praise for Saka who has had an impressive tournament. The Arsenal star had made just five appearances for England before the tournament but was an instant hit in Gareth Southgate's squad. “He’s such a super boy. He’s been a star and he’s going to continue to be a star. We’ve got to be there to support and help him. He’ll get a lot of love from outside because of what he’s done in this tournament," he said.

England at the end of the night, remained without an international trophy since 1966 and despite Luke Shaw scoring with just two minutes on the clock, the Three Lions failed to hold on to their lead and eventually conceded to Italy in the 67th minute through defender Leonardo Bonnucci. Amul Reacts to Italy's Thrilling Euro 2020 Title Win With Witty Topical, Check Post

The 50-year old further added that the players should be proud of themselves, after having had a wonderful tournament, revealing that the Duke came to visit the players after the match.

“They’ve given everything,” Southgate was quoted as saying. “They should hold their heads high. The devastation of going so close and not being able to give the country the trophy they wanted is difficult to put into context. The players have given everything and I’m proud of them. "The players are in a really quiet place. The Duke’s been down to see them in dressing room and has rightly thanked them for what they’ve done. I said we could have no recriminations. They’ve got to walk away from here heads held high. They’ve done more than any team in the last 50 years. But credit to Italy, they’ve been outstanding. The way they’ve used the ball was a little bit better than us and they were strong enough in defence to stop us creating anything.”

(The above story first appeared on LatestLY on Jul 12, 2021 10:38 PM IST. For more news and updates on politics, world, sports, entertainment and lifestyle, log on to our website latestly.com).