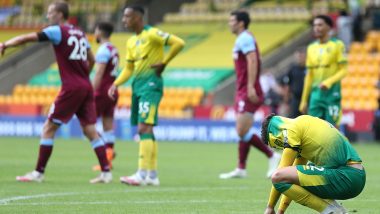 Norwich City on Saturday (July 11, 2020) became the first team to be relegated from the English Premier League this campaign following their 4-0 loss against West Ham at Carrow Road. This loss sees the Canaries end their one-year stay in England’s top-flight footballing division as they secured promotion last season. The club gathered only 21 points from 35 games so far, which is six less than the nearest team. English Premier League to Retain Five Substitute Rule Change for 2020–21 Season.

Daniel Farke and his men were involved in a relegation six-pointer against fellow strugglers West Ham United in their latest Premier League fixture. However, the Canaries couldn’t rise up to the occasion in a must-win encounter as David Moyes’ side ran out 4-0 winners. Michail Antonio was the star of the game as he scored all the goals, taking his tally to eight for the season. Football Association to Allow Players to Take a Knee in FA Cup Final in Support of Black Lives Matter Movement.

Norwich City had high hopes at the start of the season but injuries and defensive frailties has cost Daniel Farke’s men, making them the first team to be relegated from EPL 2019-20 season. The Canaries lost all of their games since football’s restart from coronavirus enforced suspension, conceding 17 goals in that time.

The Canaries have managed just five victories so far, which is the lowest in the division. Three games are still left in the season but two of them are against Manchester City and Chelsea, who themselves are chasing European spots. So only the game against Burnley at home offers them a realistic chance to secure a final league win before they go down to the championship.

However, the result was a great one for West Ham as the Hammers moved six points clear of relegation. David Moyes, who was appointed mid-season has done a good job to get his side away from drop zone but the job is not yet done as they face 17th placed Watford next.

(The above story first appeared on LatestLY on Jul 11, 2020 07:30 PM IST. For more news and updates on politics, world, sports, entertainment and lifestyle, log on to our website latestly.com).