Foul Play! As Gerard Pique and Shakira Separate Amid Cheating Allegations, Here’s a Look at Five Famous Footballers Who Cheated on Their Partners 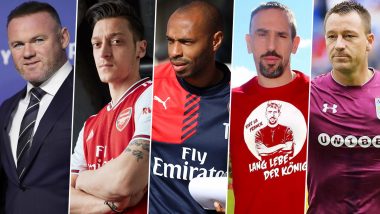 Sportspeople are thought to be the most adored public figures who get easily swayed into situations that give air to controversies, due to the fame that surrounds them. Dating a football player would be the dream of many people. The glamorous lifestyle, bank balance of millions, and luxury holidays all seem so alluring. But the reality can turn to be dark at times. Sometimes our star footballers cross the line, grabbing headlines off the pitch through various scandals. When it comes to scandals, footballers have a strong game. According to an informal poll, 80 percent of footballers are likely to cheat on their wives or girlfriends (WAGs). There have also been reports of Barcelona and Spain star Gerard Pique caught cheating on partner Shakira with another woman. The couple has also announced their separation as well. Meanwhile, here is a list of five footballers who notoriously cheated on their wives or girlfriends.  Gerard Pique and Shakira’s 12-Year Old Relationship Comes To End As Couple Announce Separation

John Terry: The former Chelsea captain married his childhood sweetheart Toni in 2007. They have twins together; daughter Summer and son Georgie. He is rumoured to have had an affair in 2009 with Vanessa Perroncel, who was an ex-girlfriend of his teammate Wayne Bridge. It's rumoured that his teammate never talked to him again.

Wayne Rooney: The English footballer married his girlfriend of many years, Coleen Rooney in 2008. He has four sons with his wife. He had multiple affairs at the start of his marriage with prostitutes. One time he didn't pay the prostitute and his actions got public and he had to apologize to his wife.

Mesut Ozil: He is a professional German footballer. He is currently married to model Amine Gülşe and they have a daughter together. During the early years of his career, he was dating singer Mandy Capristo. They broke up because he allegedly cheated on her several times with the ex-wife of a teammate.

Thierry Henry: He is a French professional football coach and former Arsenal player. He married an English model,  Claire Merry in 2003 and had a daughter with her. They divorced in 2008, after five years of marriage because of his affairs with Swedish make-artist Sadie Hewlett. He had to pay his ex-wife around £8 million for the divorce settlement.

Franck Ribery: He is a professional French footballer. He married his wife, Wahiba Ribéry in 2004. He made headlines in 2014 when he became a part of the nastiest scandal. He and his teammate Karim Benzema allegedly had made love to an underaged prostitute. His wife later forgave him and they're still married and are raising their four children together.

(The above story first appeared on LatestLY on Jun 06, 2022 12:35 PM IST. For more news and updates on politics, world, sports, entertainment and lifestyle, log on to our website latestly.com).