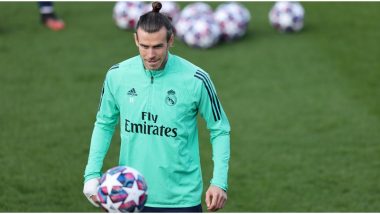 Gareth Bale is set to secure a return to Tottenham Hotspur as the Welsh player is all set to sign for the north London club as an agreement has been reached between Real Madrid and Spurs. The Wales superstar rose too footballing fame at the Premier League club but after a difficult few years in the Spanish capital, has decided to leave the club. Gareth Bale Transfer News Latest Update: Real Madrid Star Wants To Leave Spanish Club.

According to a report from Daily Mail, Gareth Bale has agreed to return to Tottenham Hotspur on a season-long loan worth more than £13 million, a part of which will be paid by Real Madrid. An official announcement from the Premier League side is expected soon and it is understood that the move was driven by Spurs manager Jose Mourinho. Gareth Bale Transfer News Latest Update: Tottenham Hostpur ‘Close’ to Agreeing Deal With Real Madrid for Wales Star.

Gareth Bale has been on the outskirts of the Real Madrid team in the last couple of years with injuries and lack of form playing a huge part. The Wales player also had a fallout with manager Zinedine Zidane which saw him being left out of the matchday squad on several occasions with the Frenchman even stating that Bale is not a part of his future plans.

However, Gareth Bale was eventually content with a spot on the bench and wanted to see out his contract with the Spanish side, which ends in 2022. But after a change of mind, the 31-year-old wants a move and regular game-time and will return to Tottenham Hotspur in the summer on a year-long loan.

The North London side were poor in their season opener against Everton and following that defeat, there was a need for some new signings. Manager Jose Mourinho wanted the player in his team, stating that Bale’s drive and dynamism is what the Spurs squad lacked. And despite reports, no player from Spurs will be involved in the deal and will go in the opposite direction.

Tottenham Hotspur are also closing in securing the signing of Real Madrid left-back Sergio Reguilon. Both the clubs have agreed on a £27million fee for the defender and the Spaniard is expected to undergo soon and will sign a five-deal with the Premier League side.

(The above story first appeared on LatestLY on Sep 17, 2020 09:40 AM IST. For more news and updates on politics, world, sports, entertainment and lifestyle, log on to our website latestly.com).