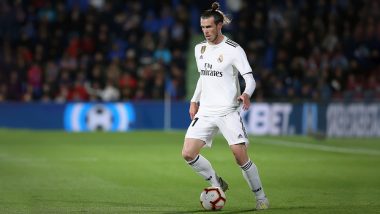 Gareth Bale’s time at Real Madrid looks to be coming to an end as the Welsh superstar wants to leave the Spanish giants in the summer transfer video. The 31-year-old struggled to get regular time at Los Blancos last season and hardly featured post lockdown as he wasn’t a part of Zinedine Zidane’s plan. The Welsh winger joined the record La Liga champions in 2013 but is looking for a way out after seven years. Manchester United List Gareth Bale As Alternate Option for Jadon Sancho After Real Madrid Lowers Signing Fee.

In past two seasons, due to poor form and recurring injuries, Gareth Bale has missed a lot of games for Real Madrid with Zinedine Zidane also leaving him out of the matchday squad on several occasions. Several doubts were raised over the Welshman's future at the club but he was adamant on seeing out his contract at Real Madrid. Borussia Dortmund Coach Lucien Favre Suggests Red Devils Should Forget Signing Winger This Summer.

In final few games of last season, Gareth Bale didn’t play a single minute for Real Madrid and was criticized for his antics on the bench. The 31-year-old was content to be a substitute under Zinedine Zidane but according to Cadena SER, the Wales player has now decided that he wants to play and get regular game time.

Gareth Bale has two years left on his contract with Real Madrid and the club wants to take the weight off the player’s salary who isn’t expected to play that many games. Recently Los Blancos lowered the forward’s transfer fee from £90 million to £18.9 m due to the impact of COVID-19 on the club’s finances.

Manchester United are one of the clubs interested in signing the Real Madrid superstar but the Premier League side are reluctant on signing the player and only want him on a season-long loan. Bale currently earns a mammoth £600,000-a-week in wages at the Spanish capital. Despite his huge weekly wage, Bale played only 20 times last season.

(The above story first appeared on LatestLY on Sep 15, 2020 03:09 PM IST. For more news and updates on politics, world, sports, entertainment and lifestyle, log on to our website latestly.com).