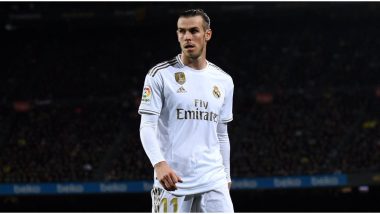 Gareth Bale is close to sealing a move to Tottenham Hotspur from Real Madrid, the player’s agent confirmed on Wednesday. Bale left Spurs for Madrid in 2013 but could make a sensational return to the club this summer with a deal likely to be in place by next week. His agent Jonathan Barnett has also confirmed they are ‘close’ to securing a move to Tottenham. Bale is not part of Real coach Zinedine Zidane’s plan for this season and has been asked to leave. The 31-year-old winger has also been linked with Manchester United but Spurs are ahead in the race. Gareth Bale Transfer News Latest Update: Real Madrid Star Wants Tottenham Hotspur Move.

Tottenham manager Jose Mourinho also spoke about Bale and his admiration for the Wales international. Mourinho implied that he will love to have the forward in his squad and rued missing on signing him on three different occasions. Bale left Spurs for La Liga in 2013 and has gone on to win two La Liga titles and four Champions League trophies in his seven-year spell at the Santiago Bernabeu. Emiliano Martinez Transfer Latest News: Aston Villa Sign Arsenal Goalkeeper for 17 Million Pounds.

He has also scored 105 goals in 251 matches for the La Liga heavyweights. But despite a trophy-laden spell and many match-winning moments, Bale has fallen out of favour under Zidane and played only 16 times last season. His off-the-field antics has also put Bale on the wrong side of Zidane’s thought of him. Bale almost joined a Chinese club last summer and was en route to sign for his new club before Real president Florentino Perez blocked the move.

This summer though he has been asked to leave and has been linked with Tottenham and United. The Red Devils, however, see him as an alternate option to Jadon Sancho and will only move for Bale if they fail to sign Sancho from Borussia Dortmund this summer. United’s waiting game have put Spurs ahead in the race.

"Gareth still loves Spurs. We are talking,” Barnett told BBC Sport Wales. “It's where he wants to be." He also told AFP previously "It's close but not done. It's a complicated deal." Tottenham guarantees Bale more playing time which he desperately needs ahead of the delayed EURO 2020 next year where he will be leading Wales.

(The above story first appeared on LatestLY on Sep 16, 2020 08:18 PM IST. For more news and updates on politics, world, sports, entertainment and lifestyle, log on to our website latestly.com).