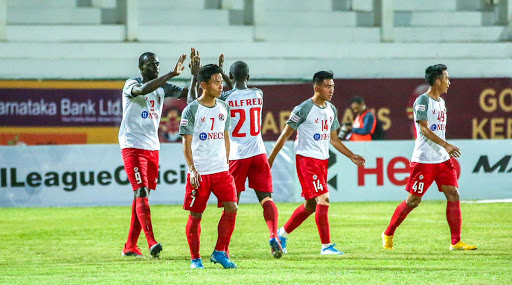 Aizawl, January 7: Aizawl FC will look to halt Churchill Brothers' great run and script a win at home when the two former champions lock horns in an I-League clash at the Rajiv Gandhi Stadium on Wednesday. Aizawl are currently placed sixth in the table with 7 points from six games and Churchill Brothers are placed second with nine points from four games. After the heroic performance against Gokulam Kerala where after being down to 10 men within the first 20 minutes of the game, Aizawl showed tremendous resilience to salvage a draw away from home at Kozhikode. I-League 2019–20: Tiddim Road Athletic Union FC and Neroca FC Set to Face-Off in First-Ever Imphal Derby.

The match didn't only reflect the robustness of the defensive line led by Kassaga but also stamped the fact that they aren't an easy opponent to break under any circumstance. Speaking ahead of the match, Stanley Rozario, head coach, Aizawl FC, said, "It was a very tough away fixture against Gokulam, as we played with 10 men for more than 70 minutes. Our players showed the fighting spirit, courage, character and commitment on the pitch and drew the match 1-1." I-League 2019-20: Fans Cheer for Real Kashmir FC Braving the Cold Weather in Srinagar, Watch Video.

"In the last three matches, we have been giving away easy penalties and this is the big worrying part now and I'm working on it. Our players have to be more cautious and not repeat the same mistakes." He also spoke about the opponents. "Churchill Brothers are tough opponents and they are in good form and coming with high motivation after defeating Quess East Bengal in Goa. They have players like Willis Plaza, Lalkhawpuimawia and Alhassan who can put pressure on any opponent but we have a plan to stop them and my players are ready to take on the challenge."

Churchill Brothers will be entering the match, having just lost a game on their way to Aizawl. Willis Plaza has been the indomitable leader of the pack and Kalif Alhassan has beautifully fit into the shoes of Dawda Ceesay who has been missing from the line up due to an injury. The consistency of Israil Gurung in delivering inch-perfect balls into the box has been another advantage for the team which eventually won the match for the Red Machines against Quess East Bengal.

Bernardo Tavares, head coach, Churchill Brothers, commented about dealing with pressure, "In football, there will always be pressure. I-League has just started now and surely all the teams are going to lose points in the future." "We must try to win the next match and try to be in the top half of the table, but the most important thing for us is to be on top of the table when the league is over."