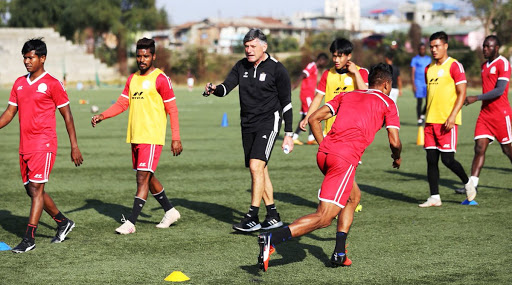 Imphal, January 7: Struggling sides Tiddim Road Athletic Union (TRAU) FC and Neroca FC will look to outdo the other and get their act together when the two local teams meet in I-Leagues first-ever Imphal Derby at the Khuman Lampak Stadium on Wednesday. TRAU remain rooted to the bottom of the league standings, five games into their debut season but have exhibited sparks of improvement over their last two games against Real Kashmir and Punjab. The duo of Kofi Tetteh and Princewill Emeka has been showing signs of cohesion up front, while the likes of Abhishek Das, Soirasham Sandeep Singh and Patrick Uche are slowly starting to gel at the back. I-League 2019-20: Fans Cheer for Real Kashmir FC Braving the Cold Weather in Srinagar, Watch Video.

Phalguni Singh has been hitting his stride in midfield and put in a Hero of the Match worthy shift against Punjab, orchestrating play in the middle of the park. Sharing the same ground, there will be no home advantage to bank on for either side. Speaking ahead of the match, Surmani Singh, Assistant Coach, TRAU FC said, "Neroca are very much aware of the ground conditions. There is no advantage but Neroca have been travelling, so they must be tired but as we know, they are a very good side. They will definitely recover and we will have a good match." Real Kashmir FC Players Train Amidst Heavy Snowfall at TRC Turf Ground in Srinagar (Watch Video).

Neroca, on the other hand, have found it difficult to hit the ground running, with their only victory of this campaign being way back in the second round against northeast rivals Aizawl FC. Since then, they have gone on to lose 1-4 at home against Quess East Bengal before playing out scoring draws away from home against Chennai City and Indian Arrows. Since their promotion to the I-League in 2017, Neroca have been a mainstay in the upper echelons of the league standings and despite not hitting full throttle yet this season, will be going into the derby as favourites.

Gaty Kouami and Chanso Horam have complemented each other in a double pivot quite well, while teenage midfielder Khaiminthang Lhungdim had a stunning shift in their last match against the Arrows. Reflecting on how monumental this fixture is going to be, Gift Raikhan, Head Coach, Neroca FC said, "We know all the football fans in Manipur are excited. The first Imphal derby is a great platform that Manipur football can use to build on." "History is being made this year. TRAU is a good team, as are we. It's going to be fun. It's going to be challenging. It's going to be one for the history books."