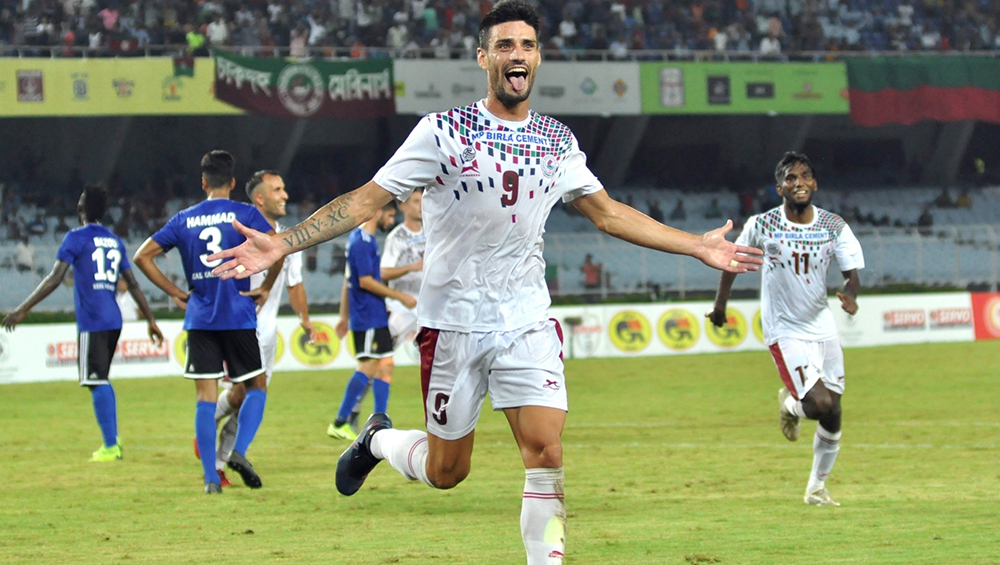 Imphal, January 23: Mohun Bagan registered an emphatic 3-0 victory away from home against Neroca FC at the Khuman Lampak Stadium on Thursday to extend their lead at the top of the table to six points in an I-League encounter. Nongdamba Naorem broke the deadlock in the 27th minute before creating the second goal for Papa Diawara in the 53rd minute. Substitute Komron Tursunov added the third, deep into stoppage time, to seal the deal for the Mariners.

Neroca had their first crack at goal, against the run of play in the 16th minute, when a Marvin Phillip goal-kick found Boubacar Diarra, who chested it down well and after seeing Bagan keeper Sankar Roy off his line, went for glory from the half-way line. His effort gently nestled the top of the net, leaving Sankar a relieved man. With Mohun Bagan clearly running a one-way traffic at this point, Neroca had started putting more men in the box, making it more challenging for Vicuna's men to penetrate the final third. I-League 2019–20 Result: Mohun Bagan End Gokulam FC’s Winning Streak in the Football Tournament, Beat Them 2–1.

Nongdamba Naorem, with two orange shirts closing him down, released the ball to Joseba Beitia. With the ball at his feet, the Spaniard now had all the attention, which gave Naorem the time he needed to make the run inside the box. Beitia flicked it towards Dhanachadra Singh who had read Naorem's run, and squared it back to him.

With three defenders closing him down, and Marvin Phillip making himself big and committing to the cause, Naorem outsmarted everyone and gently toe-poked it past the near post instead, finishing off the move he had started to give his side a well-deserved lead in the 27th minute.

In the 42nd minute, Moiranghthem Meitei handled the ball just outside the edge of his box and conceded a free-kick in the process. It was Diawara who stepped up, and his thunderbolt of an attempt flashed across goal but Marvin Phillip got a strong right hand and parried it away from immediate danger. The league leaders went in at half-time, being firmly in the driving seat and didn't miss a beat even after the break.

In the 53rd minute, it was Naorem again and this time, he left Dhananjoy Singh scrambling across, with his deft feints and with one smart switch of the ball to his stronger right, he delivered a calculated cross that seemed to float forever before it found Diawara, completely unmarked, for Mohun Bagan's second goal of the day.

Neroca failed to pose any real threat whatsoever, as the league leaders closed in on another victory. Despite being up by two goals, they were hungry for more and made no mistake in adding another goal in the fourth minute of stoppage time. The league leaders remain ahead of the chasing pack, taking their tally to twenty points while Neroca drop to ninth in the standings.