Inter Milan kept their Serie A hope alive as they registered a 4-2 comeback win over Empoli, while Juventus left Luigi Ferraris Stadium with empty hands. 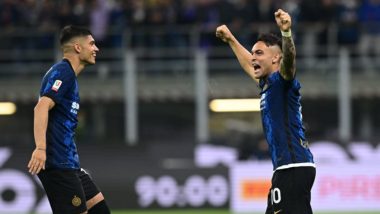 Rome, May 7: Inter Milan kept their Serie A hope alive as they registered a 4-2 comeback win over Empoli, while Juventus left Luigi Ferraris Stadium with empty hands. Inter Milan entered San Siro with two points behind leader AC Milan and needed a win to keep pressure on their city rivals on Friday night. The away side stunned the Nerazzurri as they raced into a 2-0 lead within 30 minutes, thanks to Inter loanee Andrea Pinamonti's opener and Kristjan Asllani's low strike. The defending champion woke up later to get back on level terms before the interval by virtue of Simone Romagnoli's own goal and Lautaro Martinez's volley, Xinhua reports. Lautaro's brace in the 63rd minute led his side to turn the game around, before Alexis Sanchez came off the bench to seal the win in the closing stage. Kylian Mbappe Transfer News: PSG Star's Mother Rubbishes Contract Extension Rumours Amid Real Madrid Interest.

The win, temporarily sent Inter Milan to the top place with 78 points, one point ahead of AC Milan who visit Hellas Verona on Sunday. Elsewhere, Genoa earned a precious victory as the relegation battler came from behind to beat Juventus 2-1 on home turf. With a goalless first half, the Bianconeri went ahead straight after the break, when Paulo Dybala curled in with his weak foot out of the box. Juve squandered several chances to extend the lead, as Dybala hit the post, while Moise Kean's goal was flagged offside, before Marley Ake's penalty appeal was canceled by the VAR. Genoa scored the leveler in the 86th minute when Nadiem Amiri's pass sliced Juve defense apart, Albert Gudmundsson beat Wojciech Szczesny one-on-one. Juve should have scored the winner in the stoppages time, but Kean surprisingly drilled wide when facing an empty net. The home side punished Juve in the dying minutes as veteran Domenico Criscito converted a last-gasp penalty.

(The above story first appeared on LatestLY on May 07, 2022 01:08 PM IST. For more news and updates on politics, world, sports, entertainment and lifestyle, log on to our website latestly.com).