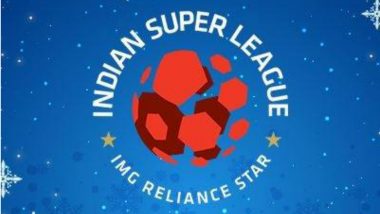 Kolkata, July 31: The Indian Super League (ISL) is the fourth biggest football league in the world on Instagram, according to a study conducted by Spanish sports business institution Deportes y Finanzas.

India's premier football league, ISL garnered 38.1 million fan interactions on Instagram between January 1 and June 30 this year. ISL's engagement on the digital platform is more than double of Italy's Serie A, which could only amass 18.1 million despite housing the likes of Cristiano Ronaldo's Juventus FC and AC Milan. Abdul Hakku Nediyodath Signs Contract Extension with Kerala Blasters Ahead of ISL 2020-21.

Less than 15 million behind third-placed Bundesliga (Germany), ISL remains on the cusp of breaking into the top three, while only heading into its seventh season since its inception. Spain's LaLiga leads the list while England's Premier League sits second with 319 million and 296 million engagements respectively.

"Sports is being consumed in huge numbers amongst the extremely tech-savvy Indian youth in the digital space. European football has been pretty popular but the increasing numbers of the ISL only show that football in India is being embraced by the country's millenials. I think ISL has enormous potential to engage more fans globally across other platforms as well," said a Mumbai-based industry expert.

Interestingly, during the period, only 46 games in the ISL were played, including the playoffs and the final, with the 2019-20 season wrapped up by 14 March. The other four leagues in the top five were forced to pause their seasons with the onset of the coronavirus pandemic. Germany's Bundesliga was the first to resume on May 16 after a 61-day hiatus.

Regardless of the lesser number of gamedays in comparison to the European powerhouses during the first half of the calendar year, the ISL scored heavily on digital fan engagement throughout its last season. An unprecedented 74.82 million interactions were recorded across the league's social media platforms (Facebook, Twitter, Instagram, YouTube) – nearly doubling the tally from the 2018-19 season.

Average matchday engagement on ISL social media platforms also saw a 16 per cent spike from 2018-19. Also, the 2019-20 season garnered a massive 213 million video views across platforms, as compared to 97 million from the previous season.

The sixth season of the ISL was marked by City Football Group's majority takeover of Mumbai City FC, ATK's acquisition of Mohun Bagan, and the renewal of the Mutual Cooperation Agreement between the Premier League and ISL.

Football Sports Development Limited (FSDL), the organisers of the ten-team leagu, has already begun preparations for the 2020-21 season. ISL season seven will take place inside a bio-secure bubble in a single venue between November and March.

(The above story first appeared on LatestLY on Jul 31, 2020 04:33 PM IST. For more news and updates on politics, world, sports, entertainment and lifestyle, log on to our website latestly.com).