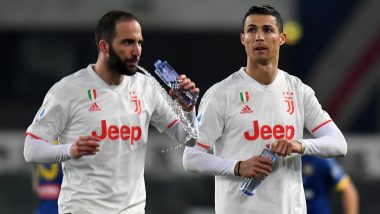 Juventus named a 22-member squad for their Serie A 2019-20 trip to Bologna with Gonzalo Higuain and Giorgio Chiellini still out with injuries. The defending league champions will restart their Serie A campaign after a three-month coronavirus stoppage and will hope to start off with a win against Bologna. Maurizio Sarri’s side are atop of the league table but are only a point ahead of the second-placed Lazio, who play Atalanta on Thursday. Juventus will also be wary of their goal-scoring form having played consecutive goalless draws against AC Milan and Napoli in the Coppa Italia knockouts. Cristiano Ronaldo, Paulo Dybala and Other Players to Watch Out in Bologna vs Juventus, Serie A 2019–20 Match.

Juventus were beaten on penalties in the 2019-20 Coppa Italia final against Napoli after the match ended 0-0 in regulation time. Napoli’s win also meant that it was for the second successive year that Juventus have failed to win the domestic Cup tournament after four consecutive victories since 2015. Cristiano Ronaldo and Maurizio Sarri Held Long Discussion Over Portuguese Forward’s Goal Drought Ahead of Juventus’ Serie A Trip to Bologna.

But it was their failure to find the net in successive games against Milan and Napoli that will have the club and manager Sarri worried ahead of their trip of Bologna. Take a look at the full Juventus squad for the Serie A trip to Bologna.

There was no big surprise in the 22-man squad with Higuain and Chiellini both missing out with injuries. Higuain’s miss –the Argentine is out with a thigh problem – also means that Ronaldo might have to start again in the centre of a three-man attacking forward line. Chiellini is also out with knee injury. Juventus also included Aaron Ramsey in the squad with the midfielder subject to a late medical test to determine his fitness for the match.

But even if Ramsey is passed fit, he will have to sit on the bench with Miralem Pjanic set to keep his place in the Juventus midfield despite his struggles against Napoli in the Coppa Italia final and his off-colour season. Pjanic has only scored three times this season.

Meanwhile, goalkeeper Wojciech Szczesny is set to return between the post after sitting out of the Coppa Italia semis and final. Gianluigi Buffon manned the post for Juventus in the cup tournament but Szczesny could return in the league.

Juventus must find their scoring boots if they are to beat Bologna, who have lost only four times at home this season. Sinisa Mihajlovic’s side are placed 10th in the league table and are contesting for the final Europa League spot (6th) currently occupied by Napoli, who with 39 points from 26 matches are five clear of Bologna.

(The above story first appeared on LatestLY on Jun 22, 2020 06:45 PM IST. For more news and updates on politics, world, sports, entertainment and lifestyle, log on to our website latestly.com).