Bologna vs Juventus, Serie A 2019–20: Cristiano Ronaldo, Paulo Dybala and Other Players to Watch Out in BOG vs JUV Football Match 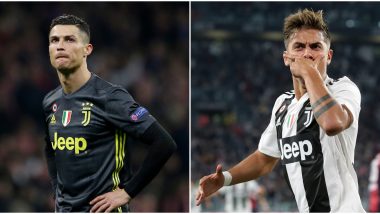 Juventus will hope to leave behind their Coppa Italia disappointment and focus on the job ahead when they visit Bologna for their first Serie A 2019-20 match since the first week of March. Maurizio Sarri’s side find themselves at the top of the Serie A points table but only a point ahead of Lazio with 12 rounds still to play. Juventus must keep winning if they are to return the Scudetto. Bologna will, however, not be an easy opponent to beat. The Rossoblu, currently placed 10th, have lost just four times at home in the league this season and will chase a win to keep their hopes alive for a European berth next season. Bologna vs Juventus Dream11 Prediction in Serie A 2019–20.

While Bologna will be playing their first football game since February end, Juventus have already appeared twice since football resumed in Italy on June 12. Cristiano Ronaldo’s side played in the Coppa Italia 2019-20 knockouts and were held to goalless draws against AC Milan and Napoli, losing to the latter on penalties in the final. Paulo Dybala Admits Playing Football Without Public is Boring, Questions Social Distancing Rules as They are Already Being Violated.

A lot of the blame for the loss and successive goalless drabs have fallen to the average Juventus midfield, which has failed to create enough chances for the likes of Ronaldo and Paulo Dybala upfront. Ahead of the Bologna vs Juventus clash, take a look at some of the key players to watch out for and players who can impact the game’s eventual outcome.

The Portuguese superstar has probably experienced his worst ever start to a season. Although this is more of a restart to the campaign after a three-month halt due to the coronavirus pandemic, Ronaldo looks like he has lost his touch. Part of the blame for that could go to manager Sarri, who deployed him as a centre-forward instead of his regular wide position.

But in the two games that he has played, Ronaldo has missed a penalty, scuffed a clear shot on goal and let go a handful of opportunities. He was in terrific form before season froze for three months – 21 league goals in 22 matches including goals in 11 successive games – and will hope to rediscover the same form at Bologna.

Dybala has struggled to get going this season and has scored just seven times in 24 league appearances. Again Sarri will have to take part of the blame for the poor season for failing to play the Argentine together with Cristiano Ronaldo in positions where both can succeed. But even if Dybala is made to play in different positions, seven goals and four assists are way below his standard. The 26-year-old still has the magic of pulling out miraculous goals from his boot and can do so at Bologna.

The 23-year-old winger is a transfer target for Juventus and several other top European clubs, who are ready with bids to prise him away from Emilia-Romagna. In his first season at Bologna –after playing there on loan from Atalanta last season – Orsolini has already scored seven times and is the club’s highest goal-scorer this season. The right-footed wide man has also assisted four times and as Bologna aim for continental football next season, Orosolini will be their biggest hope to achieve that dream.

The young Uruguayan has been the best midfielder for Juventus in recent times even surpassing his senior and star Miralem Pjanic, who has been little off-colour this season. Bentancur is already a mainstay in Sarri’s midfield and has already assisted six times in the league this season. He will hope to add more when Juventus play Bologna.

(The above story first appeared on LatestLY on Jun 22, 2020 04:21 PM IST. For more news and updates on politics, world, sports, entertainment and lifestyle, log on to our website latestly.com).