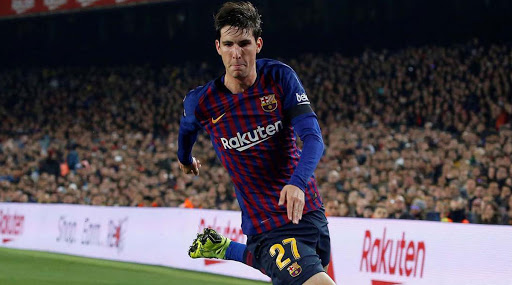 Juventus have made a bid for Barcelona defender Juan Miranda according to new reports emerging from Spain. The Italian champions were interested in signing the young full-back last summer but a deal could not be reached between the teams as Juventus wanted to sign but Barcelona only wanted a loan deal. Miranda is currently on loan at Bundesliga club Schalke, where he has found game time limited and this could tempt the 19-year-old to move to Italy. The defender joined Barcelona’s youth academy in 2014 and has made few appearances for the first team in Copa Del Rey and Champions League. Adrien Rabiot Transfer News: Midfielder Confirms Juventus Stay Amidst Speculations of Move to Arsenal.

According to reports from Spanish media outlet Sport, Juventus are interested in signing Barcelona full-back Juan Miranda and are ready to offer a deal of 15 million Euros. After missing out on the youngster last summer, the Italian side are willing to include a buy-back option for Barcelona in the deal. The 19-year-old was sent on loan at Schalke to gain some valuable experience but has struggled to get consistent game time. Miranda had to wait until the middle of December to make his official debut for the German club. Cristiano Ronaldo Scores First Serie A Hat-trick As Juventus Maul Cagliari 4-0.

After struggling for game time in the first half of the season, Coach David Wagner has started to trust the youngster and is giving him successive starts. Miranda has started last three games in a row and this could suggest that the full-back may get some regular playing time towards the end of the season. Barcelona will now have to decide if they want to keep the youngster on loan or accept Juventus’ offer.