Juventus vs Porto: Cristiano Ronaldo 'Fired Up', Arthur Melo and Other Stars Available For UCL 2020-21 Clash

The Italian champions have had to deal with a number of injuries this season but have received a boost ahead of the crucial tie against Porto as they are set to welcome a number of key first-team players for this encounter including Cristiano Ronaldo, who was rested during the weekend against Lazio. 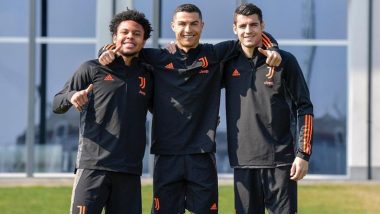 Juventus now turn their attention to the Champions League as they look to produce yet another comeback in order to advance into the next round of the European competition. Andrea Pirlo’s team find themselves behind in the round of 16 tie against Porto after losing the first leg 2-1 in Portugal but will fancy themselves of getting over the line considering their home record this season. Cristiano Ronaldo Gears Up For Juventus' Champions League Encounter Against Porto.

The Italian champions have had to deal with a number of injuries this season but have received a boost ahead of the crucial tie against Porto as they are set to welcome a number of key first-team players for this encounter. Andrea Pirlo has provided an update about several star’s injuries in a pre-match press conference. Cristiano Ronaldo Reacts After Juventus Beat Lazio 3–1 in Serie A 2020–21.

Cristiano Ronaldo was rested for the Serie A clash against Lazio and came on in the second half as Juventus registered a 3-1 win. Speaking to the press, Pirlo added that the Portuguese is fine and is raring to go. ‘Cristiano is fine, these are his matches. He's fired up, he's been able to rest and can't wait,’ said the Bianconeri boss.

Cristiano Trains With the Team

Andrea Pirlo also hinted that midfielder Arthur Melo, who has missed a number of games through injury, ‘isn’t 100% fit’ but could start the encounter. The Juventus boss also added that central defenders Matthijs de Ligt and Georgino Chiellini have trained with the group and could feature in the match.

Juventus produces a comeback in the 2018-19 season when they defeated Atletico Madrid 3-0 in Turin after losing the opening game 2-0. However, similar was expected from the Italian giants last season but were unable to turnaround the deficit against French side Lyon and were knocked out at the same stage.

(The above story first appeared on LatestLY on Mar 08, 2021 10:14 PM IST. For more news and updates on politics, world, sports, entertainment and lifestyle, log on to our website latestly.com).