The 22-year moved from Bayer Leverkusen to Chelsea for £71 million last season in one of the most talked-about transfers and became the most expensive player in the history of the London club. He had an underwhelming season, scoring four goals and three assists in 27 Premier League matches. 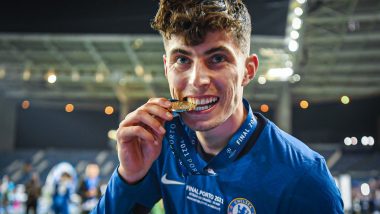 Young German midfielder Kai Havertz has revealed that he felt pressure to become the new Cristiano Ronaldo after he joined the Premier League last year. The 22-year moved from Bayer Leverkusen to Chelsea for £71 million last season in one of the most talked-about transfers and became the most expensive player in the history of the London club. The weight of the price tag instantly got to him as Havertz had an underwhelming season in London, scoring just four goals and three assists in 27 Premier League matches. He did score a hat-trick though against Barnsley in the EFL Cup back in September but that was just a one-off performance. Sports News | Own-goal Gives France 1-0 Win over Germany at Euro 2020

Speaking to German newspaper Suddeutsche Zeitung, the Chelsea player said, " People expect you to be the new Cristiano Ronaldo. But it won't be that fast, everything is new and I really didn't play my best football at the beginning."

Havertz however has made a much greater impact with under Thomas Tuchel. The German manager often plays the 22-year old as a false nine, something which has brought the best out of the player. He made a strong ending to his first season at Chelsea by scoring the only goal in his side's Champions League final triumph against Manchester City last month. This goal cemented his stature as one of the club's future stars.

Ronaldo meanwhile started off Portugal's Euro 2020 title defense with a bang as he scored a brace in their thumping 3-0 win over Hungary on Tuesday. With this performance, he also became the highest scorer in the history of the Euros. This was Ronaldo's fifth European competition, which is once again a record and is a testament to his fitness and longevity.

(The above story first appeared on LatestLY on Jun 16, 2021 05:06 PM IST. For more news and updates on politics, world, sports, entertainment and lifestyle, log on to our website latestly.com).