To rejoice their title win and EPL promotion, Leeds officials organised an open-top bus parade at Elland Road later in the evening, with thousands of fans crowding the streets, joining the team in celebrations. Questions were raised about The Whites’ decision amid the current circumstances, however, the club has now released a statement explaining their actions. 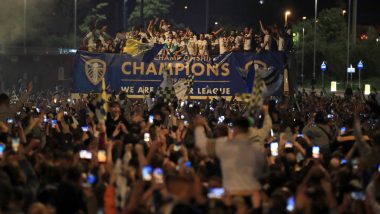 Leeds United secured Premier League promotion for the first time in 16 years following West Bromwich Albion’s defeat to Huddersfield last week. The next day, they were confirmed as EFL 2019-20 champions after Brentford lost their match against Stoke City. And with promotion and title secured, The Whites entered the final home game of the season against Charlton in a party mood. Here’s How Leeds United Players Celebrated Securing Premier League Promotion for First Time in 16 Years.

Amid the coronavirus pandemic, social distancing protocols are still in effect in the UK. But all of that went out the window as fans gathered around the team bus, singing along with the players, celebrating a moment they have waited 16 years for.

Leeds United on an open top bus outside the stadium.#lufc pic.twitter.com/piyij4cilf

Fans were advised by the club to stay in their homes but Leeds faithful gathered outside the East Stand for their teams’ final game of the season. Questions were raised about The Whites’ decision to hold an open bus parade amid the current circumstances, however, the club has now released a statement explaining their actions.

‘Following consultation with the SAG and Council, Leeds United arranged for a bus to be parked outside the East Stand reception as a contingency to assist dispersal should a crowd congregate at Elland Road despite a month long campaign from the club and supporter groups to encourage supporters to stay at home.’ Said a clubs spokesperson.

‘The safety group believed was that a brief appearance from the players with the Championship trophy, would help to signal an end to proceedings, encouraging fans to head home safely. In challenging circumstances, fan safety has always been our priority.’ He added.

Next year will be the first time Leeds United will play in the Premier League since 2003-04 season. The Whites are a historic club, with three first division league titles, and will be looking to move back amongst the English elite under Marcelo Bielsa.

(The above story first appeared on LatestLY on Jul 23, 2020 02:16 PM IST. For more news and updates on politics, world, sports, entertainment and lifestyle, log on to our website latestly.com).