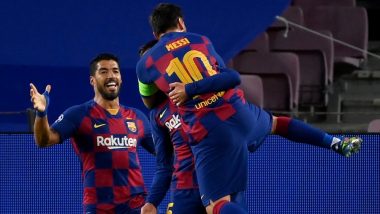 Lionel Messi led Barcelona to a stunning win at the Camp Nou against Napoli in the Champions League 2019-20 after a disappointing season at the La Liga this year. The teams took on each other in the round of 16 game aggregate of 1-1. It was Lionel Messi who led the team to a win and helped the team progress in the round of eight. With this, the six-time Ballon d’Or winner and the Catalan Giants scripted a few amazing records. But before that, let's have a look at how the match panned out for both sides. Lionel Messi’s Incredible Goal Leads Barcelona to a 2-1 Win Against Napoli in Champions League 2019-20 (Watch Video).

As mentioned above, the reverse fixture had the 1-1 result. Clement Lenglet was the one who scored the opening goal for the match at the 10th minute of the match. It looked as if Messi's men were here for a kill. As always Messi's master class continued with an incredible goal at the 23rd minute and then Luis Saurez drilled the final nail in the coffin by converting a penalty into a goal. With this, the team and Messi scripted a few records check them out below:

Now let's have a look at Messi's goal below:

The match ended with a final aggregate of 4-2. The Catalan Giants will next meet Bayern Munich in the round of eight on August 15, 2020, in Portugal. Meanwhile, Munich went on to beat Chelsea by 4-1 and at an aggregate of 7-1

(The above story first appeared on LatestLY on Aug 09, 2020 09:36 AM IST. For more news and updates on politics, world, sports, entertainment and lifestyle, log on to our website latestly.com).